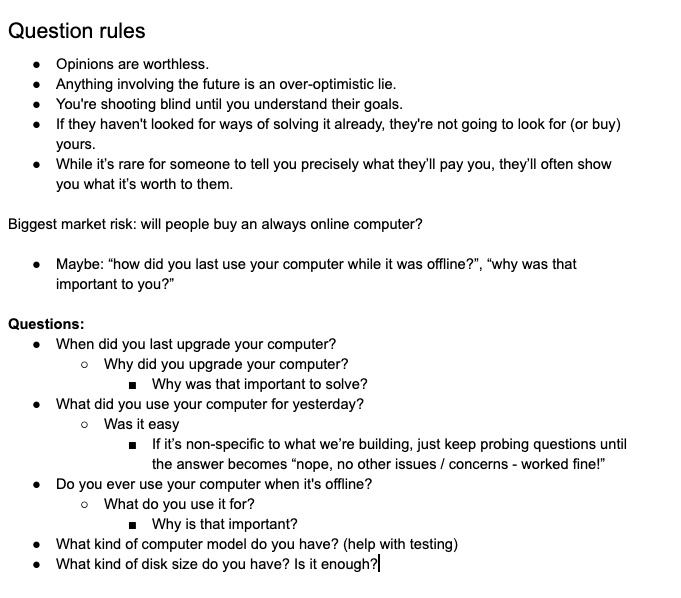 1/ The first 18 months of a startup: After starting my 2nd company in 2019, I decided I would write down useful lessons I learned or re-learned along the way. Some were hard-earned & others required steady focus. A thread that I hope may help other founders starting out 👇
5/ Occasionally someone you respect will give you unsolicited advice that may cut you down. First, absorb it. Later, try to put their advice in a way you would've wanted to give yourself. This removes the hurtful part allowing you to hear it in a way you can benefit from.
2/ Clarifying your plans: the first thing I did was write down a 7-page Elon Musk-style master plan. Write down what problem you plan to solve, how you'll solve it, and why it's important. Then have your smart friends critique it. Let no valid question go unanswered.
+ 21 more tweets

Suhail
@Suhail •
1/ Let's talk about fundraising: In 2009, Y Combinator only gave us $15K, half our YC batch died after demo day, 11 firms told us no, 2 firms wanted to find us a CEO, 1 VC told me, point blank, we would fail, we were a week away from death but luckily raised $500K @ 2M pre.
2/ A lot has changed: huge valuations, more capital available, funding vehicles at all stages, "founder friendly" is the norm, uncapped conv notes, seed stage is the new series A, YC isn't as tight knit anymore, hire a COO is the new replace the CEO, & a16z is the new Sequoia 👀.
3/ Some things haven't changed in fundraising land: male dominated/biased, herd mentality, VCs still struggle to pass on a company directly, top 5 firms founders want to raise from are relatively the same, access is still intro-based, and raising money is still a drain.
+ 15 more tweets

Suhail
@Suhail •
1/ While building the co, I found this strong desire to understand "why" a trend was going the wrong way. You can spend a lot of time going down the rabbit hole of causation. Eventually, I realized asking "why" wasn't time well spent compared to focusing on how to improve things.
2/ With many confounding variables that you cannot directly measure or aren't easy to isolate, it can often be difficult to assess whether it was your code, the weather, or did you operate better? Consider the unconventional: stop caring as much.
4/ Some of the things you fix will be obvious in their impact but sometimes you'll never know. You're operating a complex business with many factors that could've improved things so sometimes it's okay to not know. Don't spin your wheels for too long in a quest to find out why.
+ 7 more tweets

1/ The first 18 months of starting a company is often life or death. I must've made 5 different companies that each failed within 9 mo. 😭 Each time the company failed I figured out what I could do better. Eventually startup #6 got to $40K/mo by month 18. Here’s what I learned..
2/ Stay focused! Ignore things that are a waste of time: meetups & conferences, meetings with no clear agenda, fundraising if you're not fundraising, reading lots of tech media articles, etc. Every week should feel like significant progress in the first year.
4/ Growth may be flat for the first 9 months. It's gonna be okay. Almost every company has experienced this: Airbnb had to sell cereal in-between, Slack failed as a gaming company first, Tesla sold only 147 cars after 6 years! You probably won't be an overnight success either.
+ 15 more tweets