Thread by @RVAwonk: "Less than three years after Mark Zuckerberg dismissed as “crazy” the idea that fake news on his platform could have influenced the 2016 US [...]"

Caroline Orr @RVAwonk
Read on Twitter Save as PDF
Less than three years after Mark Zuckerberg dismissed as “crazy” the idea that fake news on his platform could have influenced the 2016 US election, Facebook now admits it is under siege from billions of fake accounts trying to game its systems.

Inside Facebook's war room: the battle to protect EU elections

The social media firm is deleting billions of fake accounts as it takes on a torrent of fake news, disinformation and hate speech

None were spotted by Facebook’s own tools.

"Facebook declined to give any examples of where it had intervened to stop people targeting European elections." 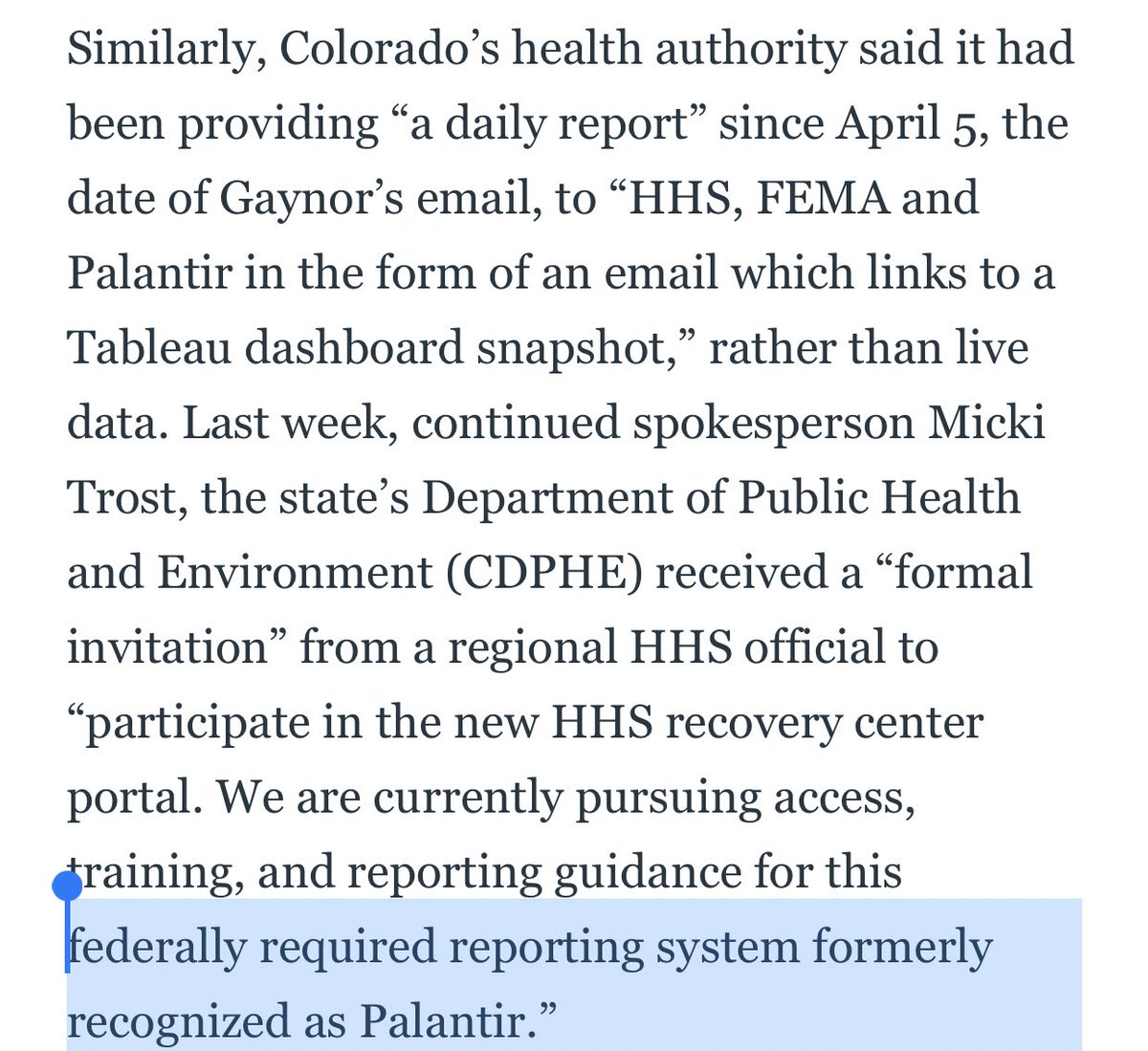 This should be illegal: Through its contract with HHS, Palantir has gained access to detailed public data sets with info on #COVID19 that they can now use to train/refine their AI — and turn public data into a massive profit-maker for the private company. https://www.thedailybeast.com/fema-tells-states-to-hand-public-health-data-over-to-palantir
WTF?? So Palantir set up a system — which is used by HHS, FEMA, and state agencies to share data on #COVID19 — and then they removed the name “Palantir” from the system and are now using an entirely different “official name” to refer to the same system...? h
“HHS Protect was set up specifically for this response effort by Palantir” ... and then Palantir’s name was just removed from the system and changed to another name? For what reason...?
+ 3 more tweets

Caroline Orr
@RVAwonk •
A reminder that Sen. Richard Burr was in the process of putting together a final Senate Intel report on the Russia investigation — due for release sometime in the next couple of months or sooner — when the Trump admin launched the probe that led Burr to step aside today.
Should we be investigating senators for insider trading? Of course we should. Every damn time. And that’s why it’s so suspicious that Burr was singled out, while Loeffler reportedly hasn’t been contacted by federal authorities despite allegedly engaging in the same behavior.
The only difference between Loeffler and Burr is that Burr was overseeing the final stages of completing a 1,000+ page report on the Russia probe that could potentially damage Trump. (The report was/is expected to reaffirm the major findings of the Mueller report).
+ 3 more tweets

1/17 Short thread on Sunnism. A common mistake made by non-specialists would have us believe that the events following the death of Muḥammad in 632 AD precipitated the Shiʿi-Sunni divide. This is quite wrong. The demarcation of sectarian identities was brought into sharp
2/17 focus significantly later, around two to three centuries after death of Muḥammad. A fact overlooked by even capable historians is that religious identity markers such as Sunni require diachronic studies sympathetic of the intellectual ambiguity that marked early Islam
3/17 Take for instance the ahistorical claims made today in some quarters - and academic circles - that make retrospectively thinkers who lived before the fall of the Umayyads either Shiʿi or Sunni. The terms do not apply then, at least not in a meaningful way.
+ 16 more tweets

Paul D. Shinkman
@PDShinkman •
NEW: A senior defense official indicates @EsperDoD and Joint Chiefs Chairman Gen. Milley didn't plan to accompany @realDonaldTrump on his walk across Lafayette Park for a photo op outside St. John's Church yesterday. THREAD:
They had left the Pentagon and were en route to the FBI field office to work with the director and AG "to observe and provide leadership." After they left, the White House requested they redirect there to update @realDonaldTrump
"While they were there, as that meeting concluded, the president indicated an interest in viewing the troops that were outside. And the secretary and chairman went with him to do so."
+ 7 more tweets

There are multiple ways to embed @RVAwonk's unrolled thread: