Thread by @DSilvermint: "Want to know why Game of Thrones *feels* so different now? I think I can explain. Without spoilers. /1 #GameofThrones #GoT #WritingCommunity" #gameofthrones #got #writingcommunity

Daniel Silvermint @DSilvermint
Read on Twitter Save as PDF
Want to know why Game of Thrones *feels* so different now? I think I can explain. Without spoilers. /1

#GameofThrones #GoT #WritingCommunity
Pantsers discover the story as they write it, often treating the first draft like one big elaborate outline. Neither approach is ‘right’ - it’s just a way to characterize the writing process. But the two approaches do tend to have different advantages. /3
It has to do with the behind-the-scenes process of plotters vs. pantsers. If you’re not familiar with the distinction, plotters create a fairly detailed outline before they commit a single word to the page. /2
Pantsers have an easier time writing realistic characters, because they generate the plot by asking themselves what this fully-realized person would do or think next in the dramatic situation the writer has dropped them in. /5
Because they have the whole story in mind, it’s usually easier for plotters to deliver tighter stories and stick the landing when it comes to endings, but their characters can sometimes feel stiff, like they’re just plot devices. /4
Well, GRRM is one of the most epic pantsers around. He talks about writing like cultivating a garden. He plants character seeds and carefully lets them grow and grow. /8
But because pantsers are making it up as they go along (hence the name: they’re flying by the seat of their pants), they’re prone to meandering plots and can struggle to bring everything together in a satisfying conclusion. /6
That’s why a lot of writers plot their stories but pants their characters, and use the second draft to reconcile conflicts between the two.

What does this have to do with Game of Thrones? /7
After the first big plot arc, book four was originally going to skip ahead five years. But GRRM didn’t know how to make the gap in action feel true to the characters or the world, so he eventually decided to just write his way through those five years instead. /10
That’s why every plot point and fair-in-hindsight surprise landed with such devastating weight: everything that happened to these characters happened because of their past choices. But it’s also the reason why the narrative momentum of the books slowed over time. /9
And now that the plants were fully in control, he struggled to get some of the characters that had grown one way to go where they needed to be for the story. (Dany getting stuck in Meereen is the example he frequently cites.) /12
Which meant planting more seeds, and watching those grow. And suddenly his garden was overgrown, and hard to prune without abrupt or forced resolutions. He had no choice but to follow each and every one of those plot threads, even when they didn’t really matter to the story. /11
And because he had all this story to cover and pay off, some of which was growing in the wrong directions and needed enough narrative space to come back around, he started increasing the number of books he thought it would take him to complete the series. And, well. /13
So the books the showrunners were adapting ran out. What now? People assume the show suffered because they didn’t have GRRM’s rich material to draw on anymore, as if the problem was that he’s simply better at generating new plots than they are. But that’s not what happened. /14
For a season or two, the showrunners actually tried to take over management of GRRM’s sprawling garden, with understandably mixed results. When that didn’t work, they shifted their focus to trying to bring this huge beast in for a landing. /15
What big moments did they want to deliver? Where should the characters end up? What did they think we, the audience, wanted to see on screen before the show came to an end? It was a Game of Thrones bucket list. /18
They want to deliver an ultimately satisfying experience. So with only two seasons to work with, they started asking themselves what was left to do. What could they build with the pieces left in the box? What beats did they just have to include? /17
They gave themselves a fixed endpoint - 13 episodes to the finale, and no more - and set about reverse-engineering the rest of the story they wanted to tell.

You see, I think the showrunners are not only plotters, they’re ending-focused plotters by design. /16
That’s why Game of Thrones feels different now. A show that had been about the weight of the past became about the spectacle of the present. Characters with incredible depth and agency - all the more rope with which to hang themselves - became pieces on a giant war map. /20
And once they had that list, it was time to connect the dots to make it all happen. So they started maneuvering the characters into the emotional and literal places they needed to be for all those dots to connect up in the right way. /19
Organic developments gave way to contrivance. Naturally-paced character arcs were rushed. Living plants became puppets of the plot. The characters just weren’t in charge anymore. The ending was. /22
Where once the characters authored their own, terrible destinies, now they were forced to take uncharacteristic actions and make uncharacteristically bad decisions so the necessary plot points could happen and the appropriate stakes could be felt. /21
There’s a reason writers have haunted eyes and always seem like they need a hug. Give everyone a break. But: the shift in approach did have consequences. /24
Is pantsing better than plotting? No. And this has nothing to do with which approach is ‘right’, anyway. It’s about the approach changing in the third act. That’s the sort of thing an audience can feel happening, even if they can’t put their finger on exactly why. /25
No one’s to blame. Keeping a million plates spinning the way GRRM did is hard. And setting those plates down without breaking too many, which the showrunners had to do, is also really hard. Creation in general is hard. /23
The audience fell in love with one kind of show, but the ending is being imported from a different kind of show. Now, I happen to think the finale will stick the landing. It’s what the showrunners have been building toward these past two seasons, after all. /26
But to be satisfying, it matters how we get there, too. Treating the journey as equally important is how you get endings that feel earned. And it’s how characters keep feeling real the whole way through, even though they’re completing arcs some writer has chosen for them. /27
By placing so much emphasis on the ending, the showrunners changed the nature of the story they were telling, meaning the original story and the original characters aren’t the ones getting an ending. Their substitutes are. /28
That’s why no amount of spectacle or fan service can make this ending as satisfying as it should be. Resolutions invite us to consider the story as a whole; where it all started, where it all ended up. And we can feel the discontinuity in this one. /29
Well that ended up being a long thread. So here’s a picture of a very nice dog. /30 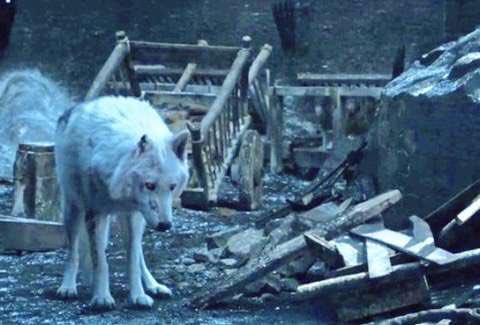 There are multiple ways to embed @DSilvermint's unrolled thread: