Thread by @EllaHillUK: "As a Rotherham grooming gang survivor I was devastated by the ‘academic’ paper produced by @DrEllaC a couple of weeks ago, in which she an [...]"

Dr Ella Hill @EllaHillUK
Read on Twitter Save as PDF
As a Rotherham grooming gang survivor I was devastated by the ‘academic’ paper produced by @DrEllaC a couple of weeks ago, in which she and co-author Waquas Tufail @Race_Class repeatedly deny the role of race and religion in the abuse we have had to endure.

Denying racist attitudes towards white girls, based on faith, does more harm.

Our families and good decent people are concerned. We are not ‘enemies of Islam’.

If they were ‘genuinely’ anti-racist then they would oppose the anti-Western racism that drives our rapists too.

Listen to victims. We are not ‘stereotyping Muslim men’. We are pleading for these racially and religiously aggravated rapes to be prevented by addressing the beliefs behind them.

We are calling for the research commissioned by Sajid Javid to be made public, so that we can get answers and get help to address it.

Slagging off other researchers who talk sense is wholly unprofessional. Their opinions are far more informed on grooming gangs than you realise.

Dr Cockbain’s own research shows that the figures are even higher, so why does she try to cast doubt on this? Legitimate government research is necessary, but not research done by people only seeking to deflect and deny.

Her own research shows that 96% of gang-groomers are Asian.

It is unprofessional and probably illegal to slander organisations like this.

In my mind, the people ‘racialising’ Child Abuse are our racist perpetrators.

Providing specialist investigative teams for serious organised crime linked to terrorism is hardly ‘erasing’ anyone. The people you are trying to erase are victims of abuse linked to faith and belief.

The vast majority of people who care about this issue are in no way far-right, Nazis or fascists. It’s actually insulting to belittle us by saying this.

I do not know the people who wrote the Quilliam report but I consider it to be the most honest research that I have read on grooming gangs so far.

Dr Cockbain’s paper, on the other hand, is dangerously close to telling victims to ‘shut their mouths’ for the sake of diversity.

THREAD: The Met Police have asked me to contact them to give a statement about the Hate Speech crimes of ‘anti-racist’ far-left online activists that have been reported to them. So here’s my Impact Statement for you @MetCC...
The racist abuse that Pakistani Muslims bombarded me with has impacted me in a deep way. I was called a white slag and white cunt by the racist rapists, who truely hated me because of the colour of my skin. They drove me and my family to move away, and change my name.
I’m not afraid of being milkshaked, or screamed at by some women with purple hair. This is far, far worse than that... I’ve suffered. I’ve been through extreme trauma, worse than most people can even imagine. I’ve been stripped, beaten black and blue, and raped over 100 times...
+ 14 more tweets

Dr Ella Hill
@EllaHillUK •
As a Rotherham grooming gang survivor, and an honour-based violence survivor, I’m now calling on government to write new legislation to ensure that CPS recording and sentencing for our crimes recognises the racist and religious aspects of the abuse we have had to endure.
I’m recommending that a APPG working group is set up to brainstorm ideas to improve prevention, protection and prosecution.
And I’m recommending that CPS use a new ‘flag’ for grooming gang crime, something like ‘Gender-based violence linked to faith and belief’ with early referral to specialist prosecutors, ‘expert witnesses’ available, and monitoring of numbers of reports, and successful convictions.
+ 9 more tweets 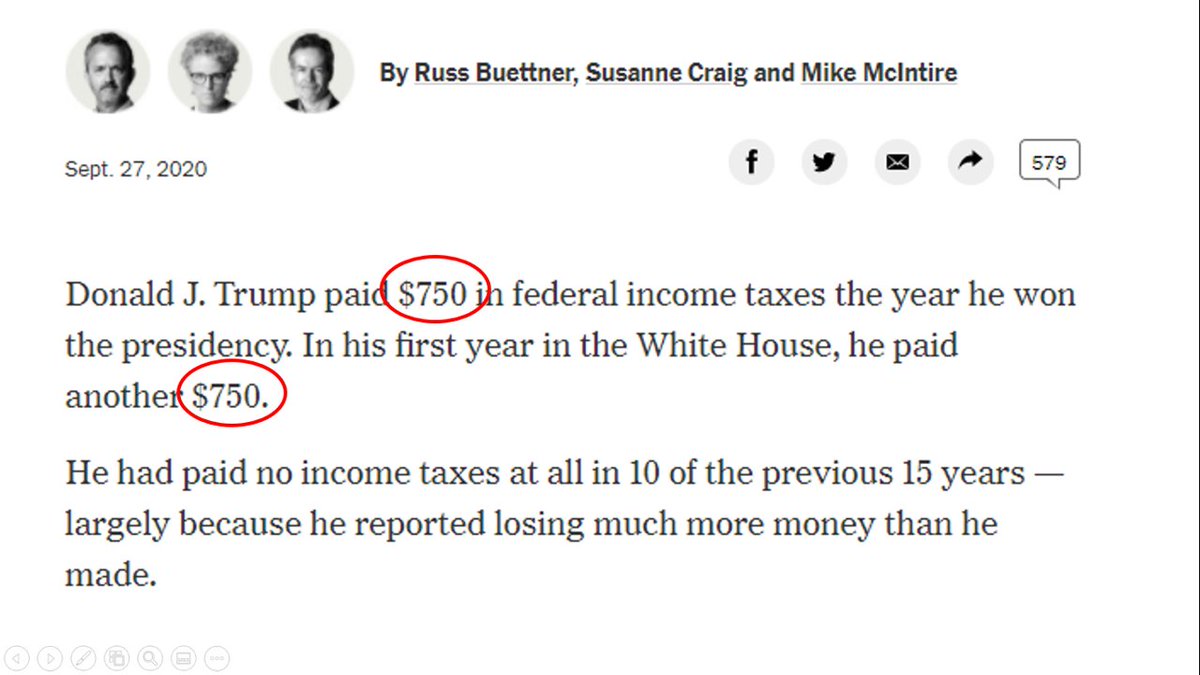 1/ The New York Times #TrumpTaxReturns story is terrific. I had about a million thoughts as I was reading though. I'll be annotating those here, in this thread, for the next few hours.
2/ Story starts with this bombshell, that Trump paid just $750 in taxes in 2016 and another $750 in 2017. Shocking numbers for someone who we estimate is worth $2.5B. (Yes, you can still be really rich and disclose a tiny income or even huge losses. More on his net worth later.)
3/ Then we get to this part about the current state of his business, which highlights the amount of debt that Trump has coming due. We actually already know a lot about his debt -- far more than most people who follow the news might think. Let's pause here and dig into it.
+ 31 more tweets

There are multiple ways to embed @EllaHillUK's unrolled thread: