Thread by @WilliamYang120: "Just to add a bit more to what was mentioned in the show but I wasn’t able to elaborate on - #China’s state media has been reporting about [...]" #china #wuhanvirus #chins

William Yang @WilliamYang120
Read on Twitter Archive
Archive to PDF: This thread can be removed from Twitter at anytime. Archive this thread to PDF, save and print. It is a premium feature and costs $5 per month.
Just to add a bit more to what was mentioned in the show but I wasn’t able to elaborate on - #China’s state media has been reporting about building new hospitals dedicated to treating #Wuhanvirus patients in multiple provinces and cities, which I think reflect the ... ht

... seriousness of the spread in #China, but also the lack of facilities that can handle the rising number of patients.
Also, one thing that #China is hiding is the number of death caused by the virus. Credible Chinese media outlet @initiumnews interviewed people working at local cremation centers, confirming that many dead bodies were sent directly from the hospitals to the cremation centers...
... without properly identifying these patients, which means there are patients who died from the virus but not adding to the official record. That shows the current death toll of 133 that we are seeing is way too low.
So there are reasons to remain skeptical about what #Chins has been sharing with the world because while they have been more transparent about certain things related to the virus, they continue to be sketchy and unreliable in other aspects.

More from @WilliamYang120 View All

Dan Price
@DanPriceSeattle •
5 years ago I cut my CEO pay from $1.1M to $70k so I could pay all my employees at least $70k. That's not good enough anymore. Today I cut my pay to $0. I'm committed to laying off 0 of our employees. It's not much but it's what I can do. We'll get through this together.
Our COO, Tammi Kroll - the highest paid person at our company - is also cutting her pay from $275,000 to $0. She already took a million-dollar paycut, leaving her Silicon Valley executive job, to come here. We've lost half our revenue but together we're going to have 0 layoffs.
To those asking if we are hiring: We just lost over half of our business, so we are pausing any hiring for the first time in 11 years. We are considering a contractor program for sales leads to help us grow. Biggest challenge we have ever faced but we are ready for it!
+ 3 more tweets

Hey all, some Tweeps (@jarroddoherty, @johnboiles) and I are part of a volunteer effort to help ppl 3D-print custom masks to tackle the shortage in PPE equipment. We are in DIRE need of more 3D printers to test masks with Bay Area doctors! Here's a cool vid of our app:
Time-lapse of a mask being printed! As we ramp up production, we are calling for anyone who has access to a 3D printer and wants to help to fill out this form: https://lg2point0.typeform.com/to/qzkbcG. My DMs are open as well!
Some more shots of our masks!
+ 3 more tweets 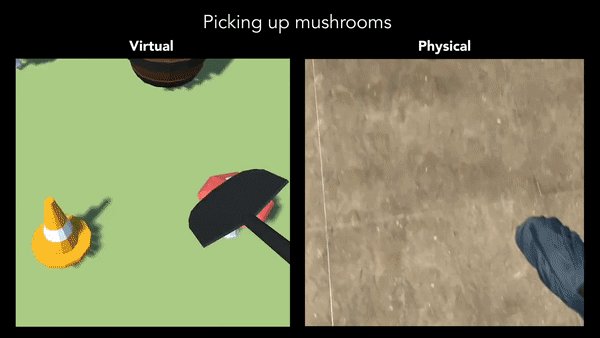 Our #CHI2020 paper, “ARchitect", explores the building of an interactive virtual experience from physical affordances of everyday objects, with a HITL workflow. Please check our project page for paper, video, and more: https://chuanenl.in/architect/ [1/9] h
To avoid bumping into physical obstacles, VR systems often restrict users to a small confined area. However, prior work has found that real-walking and receiving haptic feedback from touching physical objects registered with virtual proxies increases VR presence. [2/9]
Idea: We exploit the asymmetric dynamic between the worlds of two users: one as the Assistant in *AR* and the other as the Player in immersive *VR*. We capitalize the distinct perspectives of the shared experience through a simple yet effective authoring workflow. [3/9]
+ 8 more tweets

Rob Henderson
@robkhenderson •
Broadly, there are 2 elite factions in tension with each other. Thomas Piketty describes them in his new book, as have others
1- Cultural elites. Hollywood, universities, media. They push wokeness & redistribution. In part because this weakens group 2. They have social power 2- Economic elites. Business, finance, etc. Hope to make $ from group 1 by appeasement & advertising. They have economic power
Cultural elites see social distancing as helpful. They don’t want people to go back to work. One reason is because it would kill people. Another is because a Depression promotes redistribution, and weakens the power of economic elites
+ 5 more tweets

There are multiple ways to embed @WilliamYang120's unrolled thread: