Thread by @yfreemark: "The final stimulus will have $25 billion for transit and $150 billion for states & localities—both the higher levels from the original [...]"

Yonah Freemark @yfreemark
Read on Twitter Archive
Archive to PDF: This thread can be removed from Twitter at anytime. Archive this thread to PDF, save and print. It is a premium feature and costs $5 per month.
The final stimulus will have $25 billion for transit and $150 billion for states & localities—both the higher levels from the original House bill.

Bill will include a significant infusion for housing, including $4 billion for homelessness programs and several billion in total for public housing, project-based rental assistance, and housing choice vouchers. These are the lower numbers, however.

There are also some major issues with the bill, such as whether $1200/person+ $500/child in cash assistance is enough, whether $350 b in small business loans is responsive to the current crisis, and whether $500 b in loans for big companies is a good idea.
And there are a lot of things we just don't have the answer to until we see the text:

Here are my estimates from Monday about how much each region in the US would get in transit funding assuming $25 billion in grants:

Remarkable elements of the $25 billion for transit:

Almost 3x what the federal government spends annually on grants for transit systems.

Provides a huge infusion of dollars into transit *operations,* which have been mostly off-limits for federal transit funding for years.
The bill, once passed, will save the nation's public transit systems from the worst crisis in their collective history.
For cash benefits, based on previous versions of the bill, it is likely that ppl who filed taxes in 2018 & 2019 + ppl on Social Security database would get funding (to be confirmed).

This is better than the 2001/2008 checks, but still leaves a big gap:
https://theappeal.org/coronavirus-covid-19-cash-assistance-for-all/
There is $4b for homeless assistance, which is not to be dismissed!

But cities/states need to mount a major campaign to help ppl who have not done so file taxes. This should include allowing homeless ppl to use city offices as addresses.
But there are still going to be millions of undocumented ppl who are not on tax rolls and who will be very vulnerable in coming months. At the local level, we need to fight to help them.
Not sure if this is confirmed, but it looks like the bill will provide the government equity stake in airlines if they receive funding: https://twitter.com/DeItaOne/status/1242802862607994882

The bill includes $400 million to help states ramp up vote-by-mail—this is essential given the difficulty in actually doing so https://theappeal.org/politicalreport/how-states-can-shore-up-mail-voting/—but the bill does not mandate that states engage in this.

This is an important issue: Just because transit agencies will have cash doesn't mean they'll be able to provide service. But it will allow them to (a) continue paying their employees; and (b) resume normal operations when this crisis (eventually) ends.
https://twitter.com/ACMELeader/status/1242815946512912390

Airlines will get significant cash assistance—but the money can only be used for paying workers. Very good compromise here.
https://twitter.com/JStein_WaPo/status/1242832275831689220

More from @yfreemark View All 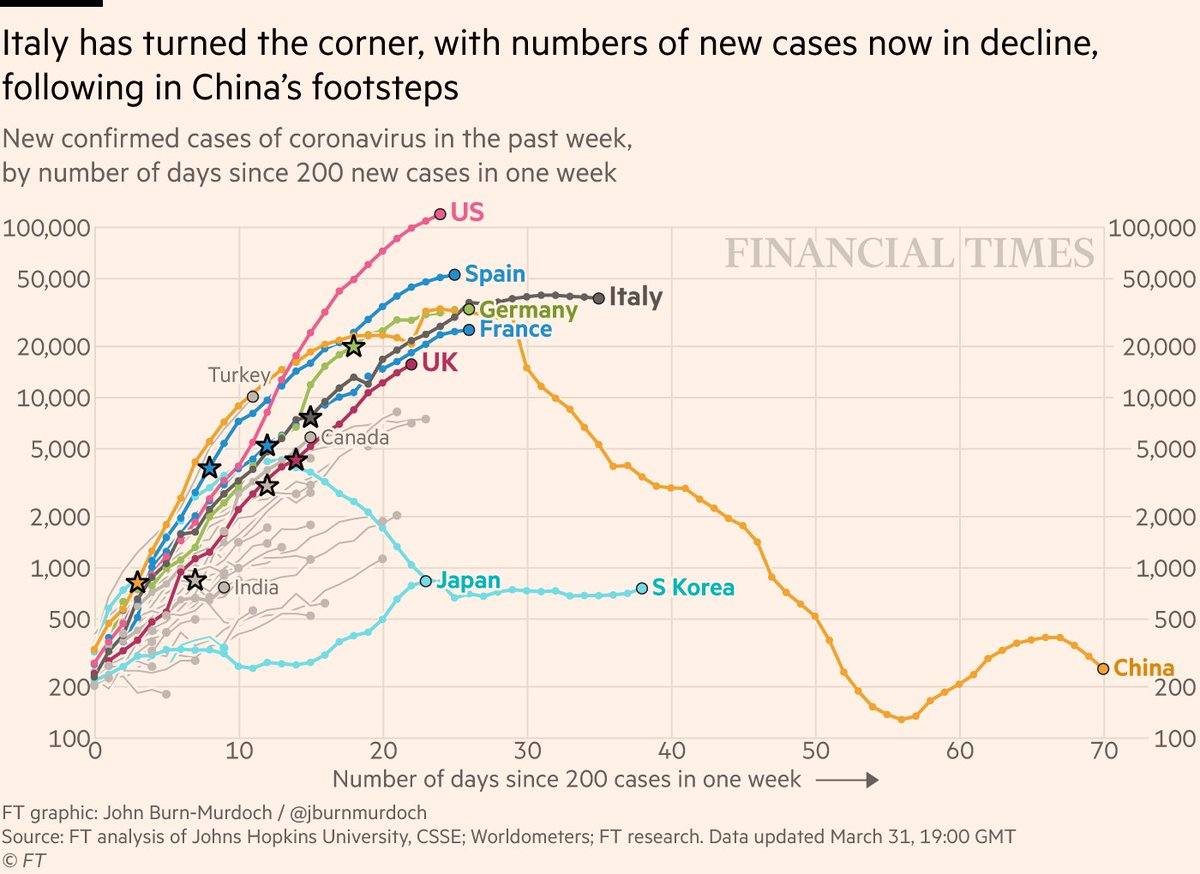 NEW: Tues 31 March = overhaul of coronavirus trajectories As the story shifts, the charts shift. We’re now focusing on *new* cases & deaths rather than running totals. Why? Because key for any country is when today’s new cases are fewer than yesterday’s http://ft.com/coronavirus-latest
How to read the new charts? x axis is still days into outbreak, but y axis is now the number of new cases in the past week. Line rising? Each week brings more new infections, outbreak is accelerating. Line falling? This week was better than the last. We’re past the worst of it.
Loads of stories in here • Italy has turned the corner. New cases falling • US? >100k *new cases this week* • China squashed its outbreak, but as restrictions are lifted, cases rebound. Lockdowns don’t end overnight ⚠️ • Japan looked like a success story, but cases now rising
+ 10 more tweets

Scott Adams
@ScottAdamsSays •
The #Coronavirus is acting like an unwelcome Olympics for scientists, doctors, engineers, entrepreneurs, techies, leaders, parents, and ordinary heroes of every kind. Setting records in every event.
One way to imagine the future is that the economy will lose trillions of dollars and we will never get it back.
You can almost feel humanity getting smarter. The most capable among us are forming lasting connections. Sharing best practices. Learning shortcuts. Building a working trust. Creating tools at blazing speeds.
+ 10 more tweets

Nils Gilman
@nils_gilman •
Over the last few decades there has been a coupling of two things – the “individualization” of risk, and the protection of “individual” privacy. This libertarian view of government is likely to be severely damaged by the Covid-19 pandemic. A thread: 1/7
Those in favor of privatizing risk were mostly (right-wing) economists who embraced the “public choice” critique of gov't actors as self-dealing. They argued that individuals understand their risk preferences better & are better at managing them than any institutional actors. 3/7
By contrast, those in favor of protecting individual data are (mostly left-wing) “privacy activists” who, often in the name of “human rights," sought to protect individual habits from the gaze of powerful actors. 4/7
+ 6 more tweets

Bill Ackman
@BillAckman •
I have received a fair bit of criticism over the last few days from some who have claimed that I and our investors have profited from the Covid 19 crisis. Some have said that I intentionally scared people about the crisis to increase our profits.
I recently addressed these critics in a six page letter, but since few have time to read six page letters, I thought it would help to summarize the facts in a few tweets. I invest capital on behalf of 1,000s of investors through a public company called Pershing Square Holdings.
Our investors are both large and small. Since we manage funds through a public company, the price of entry is small. One share can be purchased for less than $20. Some of our investors include other fiduciaries like pension funds.
+ 24 more tweets

There are multiple ways to embed @yfreemark's unrolled thread: