Thread by @SethAbramson: "(THREAD) So Bill Barr found his one "Antifa looting" case and is running with it—to the delight of the alt-right. The problem with the cas [...]" #blacklivesmatter

Seth Abramson @SethAbramson
Read on Twitter Save as PDF
(THREAD) So Bill Barr found his one "Antifa looting" case and is running with it—to the delight of the alt-right. The problem with the case? Only *everything*. I'll break down this preposterously off-track ploy by Trump, Barr and the Department of Justice.

The FBI is now involved in an investigation into the burglary of a Target store in East Austin, the American-Statesman has learned.Austin police arrested

Austin American-Statesman
1/ I wasn't kidding when I said *everything* is wrong here—it's like a law school issue-spotter. Let's start with the buried lede in the story on the arrest in the AUSTIN AMERICAN-STATESMAN, which quotes the Travis County district attorney's office (see next tweet for the quote):
2/ The quote: "The Travis County district attorney's office said the 3 people arrested are known members of a local anti-government group that is 'a self-identified communist/socialist ANTIFA group.'"

Can you spot the problems in that sentence? Let's break them down, one by one.
3/ First, even the prosecuting authority says that it's a "local" group—meaning that there's no evidence any state lines were crossed as part of the alleged crime in question (and I'll get to the identification of that crime in a moment). So why is the FBI involved at *all* here?
4/ Well, the article explains that Barr got involved via the FBI's domestic terrorism task force. Which means that, while the "group" involved—more on that in a moment—is local, the *crime* being charged suggests terrorism. And the crime is...? Burglary.

Yes—you read that right.
5/ What Barr is saying is, "Hey, this may *look* like three twenty-somethings using mass protests as an excuse to steal a few items from a Target, but no! It's part of an interstate plot to cause *terror* for *political purposes*." Again...this is a yawn-inducing *burglary* case.
6/ But how about this "group," huh? Sounds scary! Per the Travis County district attorney's office—which I'm sure never gets political—the "group" in question is a {checks notes} "communist/socialist group." Yeah, except it's not. It literally *couldn't* be. Happy to explain why.
7/ It is *only* in far-right conservative political rhetoric that communism and socialism are interchangeable. No one with *any* interest in these two political philosophies believes you can mash them up with a forward-slash and say, "Yeah, you know...*either* of those, I guess."
8/ So could these twenty-somethings be in a local communist organization? Sure. And it'd be legal. And there's no apparent evidence that this {eye-roll} *burglary of a Target* was inspired by {rechecks notes} a *communist* political ideology. (I'm sure you catch the irony there.)
9/ But wait! It gets better. Because the Travis County district attorney's office didn't just reveal that this is a political stunt by inserting the word "socialist"—did they have DOJ input on that statement, I wonder?—they also played politics with "ANTIFA" and the word "group."
10/ As everyone except Trump, Barr, and—apparently—the Travis County district attorney's office knows, ANTIFA is not a "group." You can't "belong" to ANTIFA. So framing these twenty-somethings as part of an "ANTIFA group" is just a way for Travis County to *invite Bill Barr in*.
11/ Why do all this? So propaganda slingers like Jack Posobiec can do Trump and Barr a huge solid and amp up the alt-right. That's all Barr needed: a headline Trumpists could work with. And they're working it, all right, down to the "group" angle (note the word "members," here): 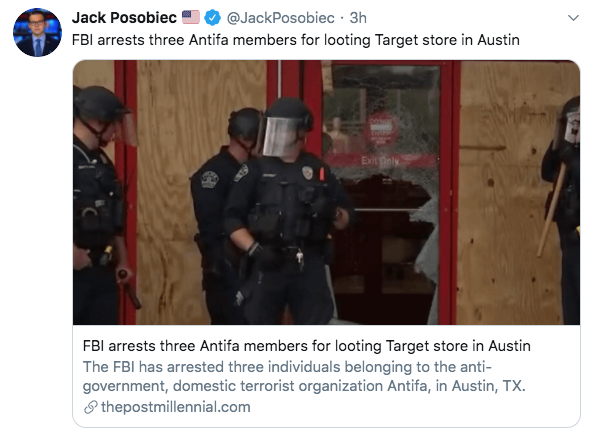 12/ Don't get me wrong, there have been incidents in the past in which individuals identifying with the "ANTIFA" movement have committed crimes. But here's the rub: it's almost *always*—because of why the movement exists—in situations with *a crowd of white supremacists present*.
13/ The problem Trump and Barr ran into with these protests is *white supremacists didn't attend them in appreciable numbers*—likely because they were scared to be around large crowds filled with the sort of people they hate and fear—and therefore ANTIFA *had no reason to fight*.
14/ There's nothing in the ANTIFA movement relating to burglarizing a Target. There *is* something—in some quarters of it—that has to do with punching Nazis, so when Nazis don't show up to #BlackLivesMatter protests it leaves Trump, Barr, and Posobiec without an ANTIFA narrative.
15/ So this Texas case is a desperate, sad, transparently pathetic attempt to craft a narrative around ANTIFA and a narrative around the protests that's either impossible or near-impossible to credit—but which Trump so badly needs Barr to credit that DOJ *federalized* a burglary.
16/ Note that—per the AMERICAN-STATESMAN—"roughly 20 to 30 protesters stood in front of the Target...[and] some...ripped away the plywood on Target's doors while others held up a sheet to hide them." This indicates the 2 or 3 arrestees *weren't* acting as part of their "group."
17/ That is, from the standpoint of criminal investigations—work that I used to do and (as a public defender) oversee—if you have 20 or 30 people doing something and only 2 or 3 are part of a known "group," it seems like a crime of opportunity rather than a group-coordinated act.
18/ The way this would normally be handled is the Travis County district attorney's office would pick up the case, investigate it for around (because it's a felony) 30 days or so, and *then*—if evidence of a *political motive* and an *intent* to terrorize were found—call the FBI.
19/ So everything about the case stinks—but it's going to serve, apparently, the nakedly political interest Barr had in seeing the FBI's joint domestic terrorism task force get involved. And some folks in Travis Co. are scoring major brownie points with Trump while they're at it.
20/ Hopefully this brief case study in how Trump and Barr are using the criminal justice system to score cheap political points in advance of a general election has been helpful. I hope you'll retweet the first tweet in the thread for any others you think may be interested. /end
PS/ Also, note how much work the word "known" is doing in the AMERICAN-STATESMAN story. It suggests that the Travis County district attorney's office didn't necessarily get its information on the suspects' "group" affiliation via the suspects themselves—but unknown other sources.