Thread by @hkeskiva: "1/🧵 As someone who likes profits, been asking myself, if I had invested in attractive high-growth companies in their early years e.g. -A [...]" #amazon #oatly #adobe #walmart #visa

As someone who likes profits, been asking myself, if I had invested in attractive high-growth companies in their early years e.g.
-Amazon
-or Netflix?

In this thread, we learn one way to value PRE-PROFIT COMPANIES by using gross income.

The obvious problem is that not all promising companies show earnings or cash flow starting Day 1.

Earnings are what the hardcore “value investors” demand for their valuation Excel exercise.

But it’s lazy to stop there. How could we rethink the valuation process?
3/🧵

If we can’t rely on cash flows or earnings, we must “climb up” the income statement. Operating income, or EBIT, could work. 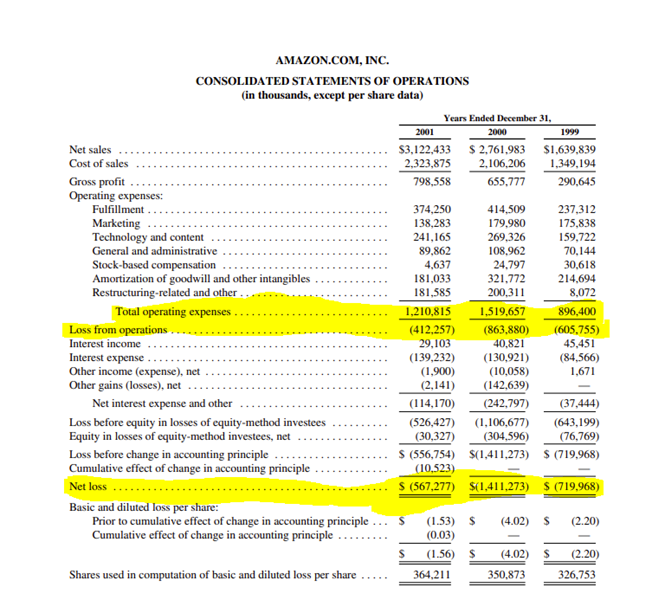 How about starting from topline, with revenues?

Industries are different; all revenue is not created equal. Why, then, would we value revenues as if they were?

To make things more challenging, total U.S. market net margin was 5% with sectors ranging a lot from 25% to -79%. Revenue-based valuation is veeery tricky.

For a sector by sector margin data, visit @AswathDamodaran website at 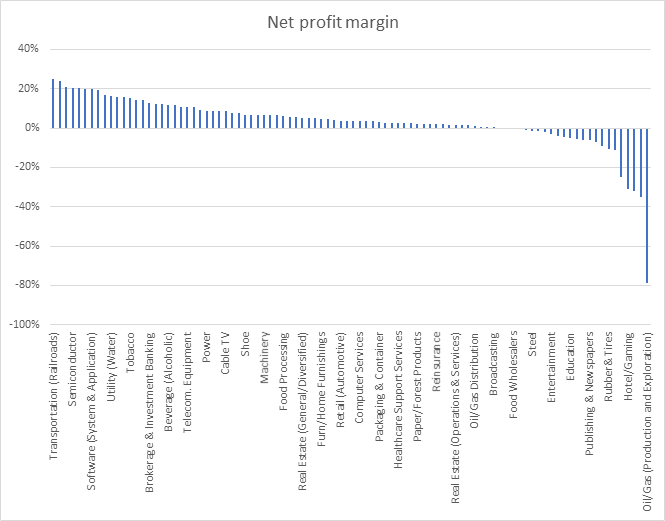 While earnings vary greatly depending on the company maturity (growing or stagnating), gross margins tend to move less.

Take for example #Adobe that has had surprisingly consistent gross margin profile since 1986, when it was more than 200x smaller company. 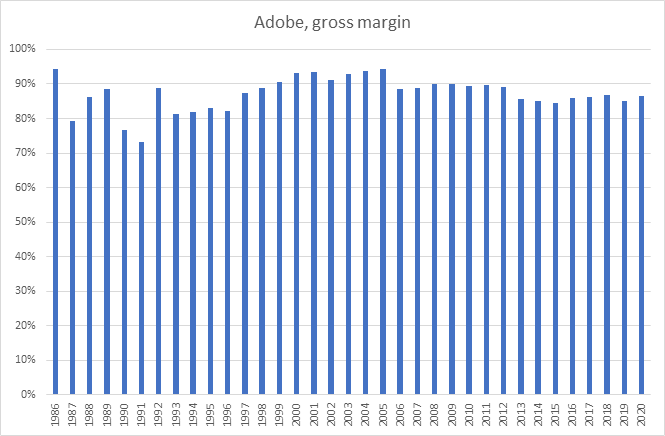 When companies mature, their true profitability will surface as growth investments are (in the optimal case) being diluted by the growth and scale of the company. 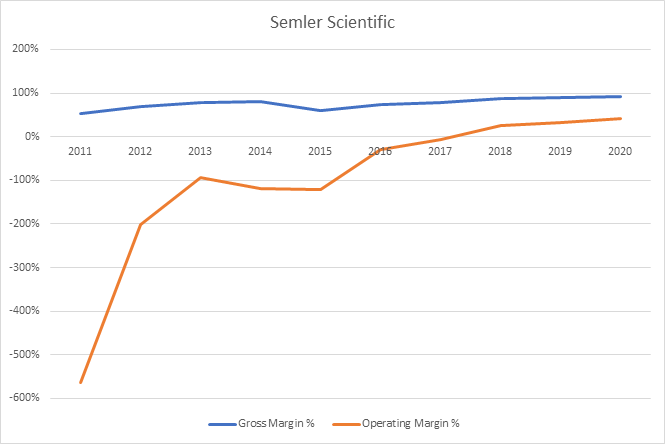 You can also identify the early signs of the future profitability levels by using an approach of incremental margins, described here more in detail.

Looking at the whole U.S. market, we can roughly conclude that on average, 1/3 of gross profit ends up being operating income:
- Gross margin 36%
- Operating margin 10%

For reference, here's the gross margins and operating margins for Nasdaq 100 companies. 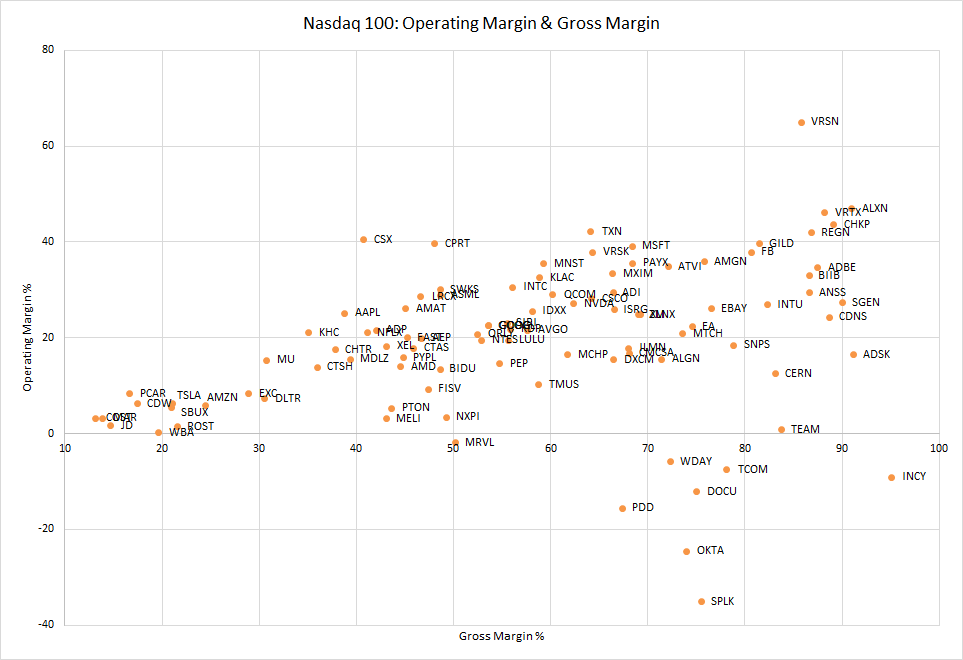 With the help of gross profits, we can now move to the actual process of valuation.

Here things get personal as everyone has different preferences and goals.

For example, I seek investments that double in value in 5 years. In other words, I seek 15% annual returns.
11/🧵

As we concluded earlier, we have a reason to expect that over time, great companies can turn 1/3 of their gross profit into operating income.

To be conservative, let’s assume such operating earnings power to trade on the market with an EV/EBIT multiple of 15. Some companies would trade higher, some lower – but I like it simple.

In other words, I can find logic in paying today roughly 5x gross profit (100) of this (yet unprofitable) growth company.

If we play around with values for both growth and EV/EBIT multiples, we get the following table and a rough rule of thumb;

Yet, I’d never pay a >20 multiple, simply because growth rates beyond 60% over 5yr are extremely rare.

This is a personal preference, reflecting my safety margin. That’s not to say some companies can't justify such valuation, I just don’t see that kind of risk attractive.
20/🧵

For other references, here are some current Gross Profit multiples for well-known companies.

This is also a viewpoint shared by @FocusedCompound that prefer emphasizing gross profits over revenues and being cautious of elevated gross profit multiples.

For example, here they reflect valuation of $TSLA and $CHWY. 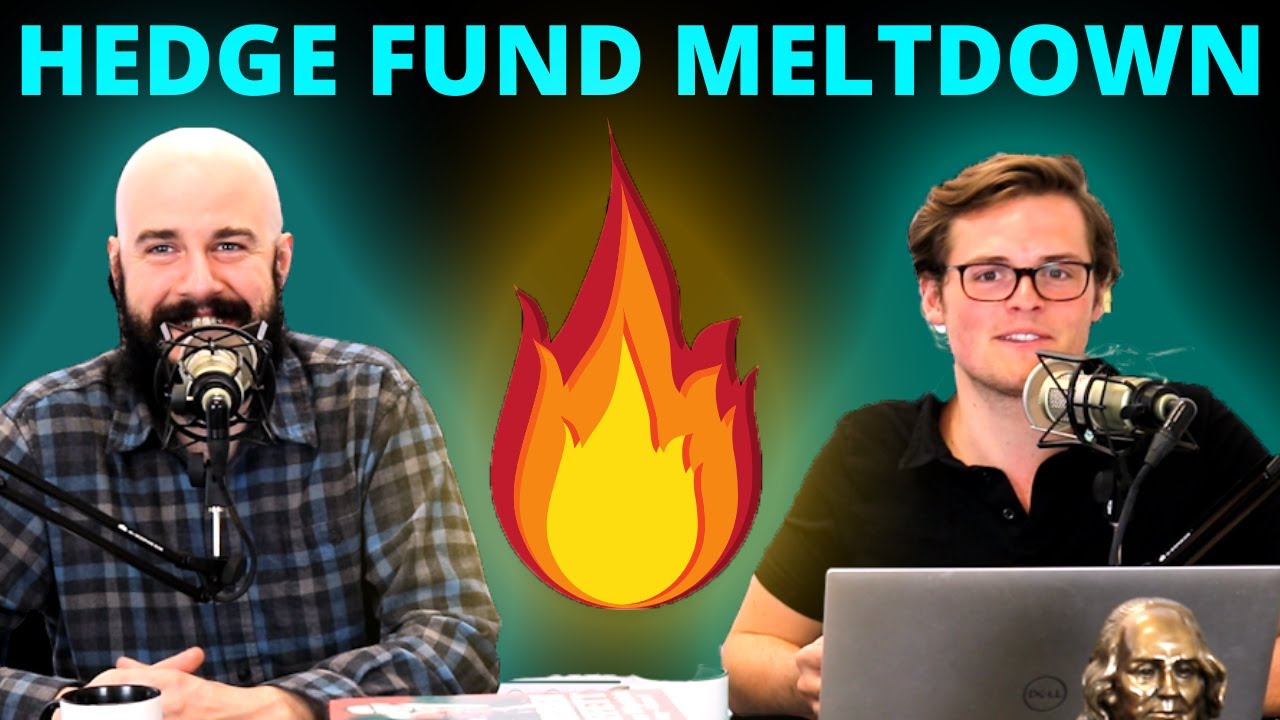 Let’s now return to the original question if this approach would help us to identify hidden gems, yet unprofitable growth companies.

Let’s start with #Amazon, focusing on its early years.
22/🧵

(To smoothen things, I use 3y growth averages) 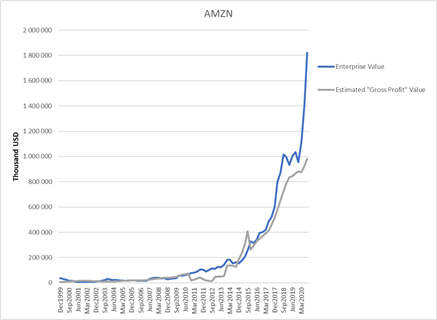 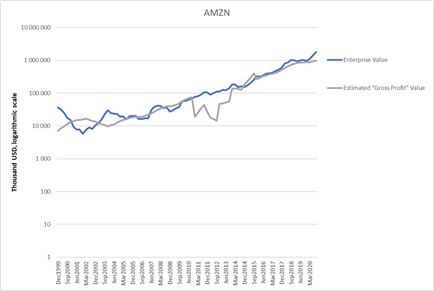 During the same period, Amazon had an annualized operating income of -702 MUSD.

We got an actual buy signal for an unprofitable growth company with a plausible logic.

What about Semler Scientific? (note log scale in the other pic) 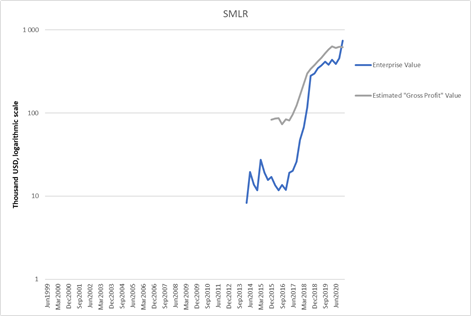 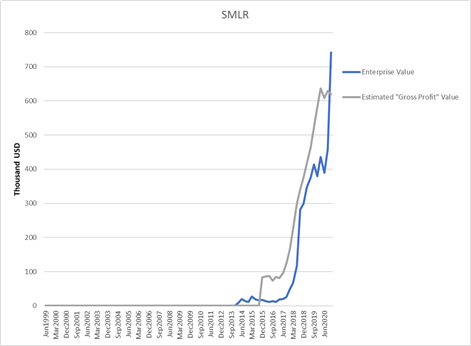 We can also apply this to recent #Oatly IPO.

Gross profit multiple 20 x gross profit 130M = 2.6 BUSD that is, in fact, the valuation with which it raised year ago but now going public at around $10B. Pass for me. 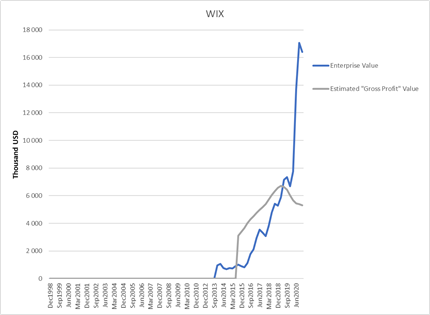 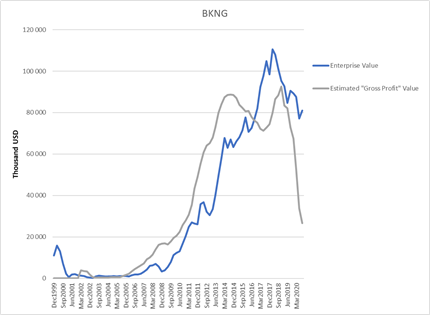 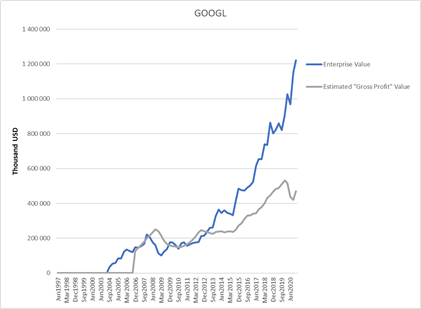 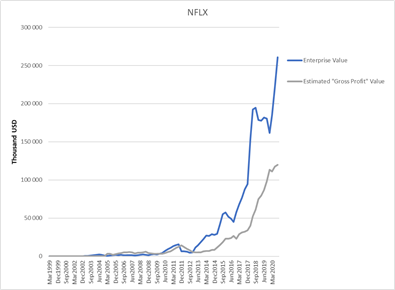 1) we assume company can reach its potential, but many don’t. Investor still must make sound picks. 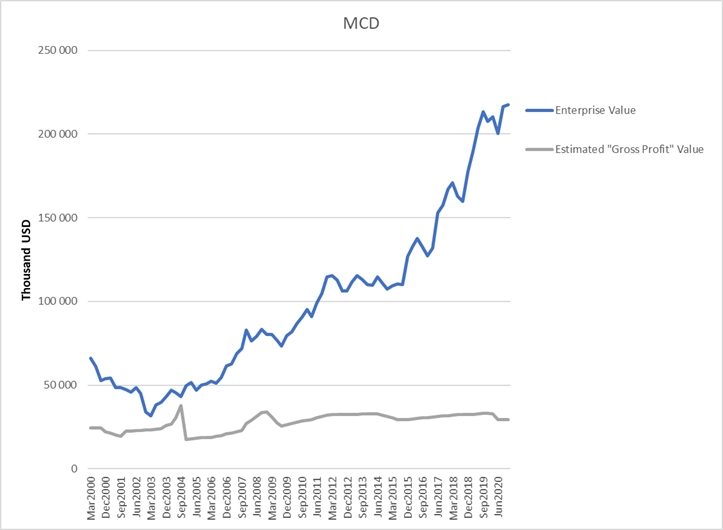 It’s easy to pick successful companies with the benefit of hindsight. What about famous dotcom darling Webvan? 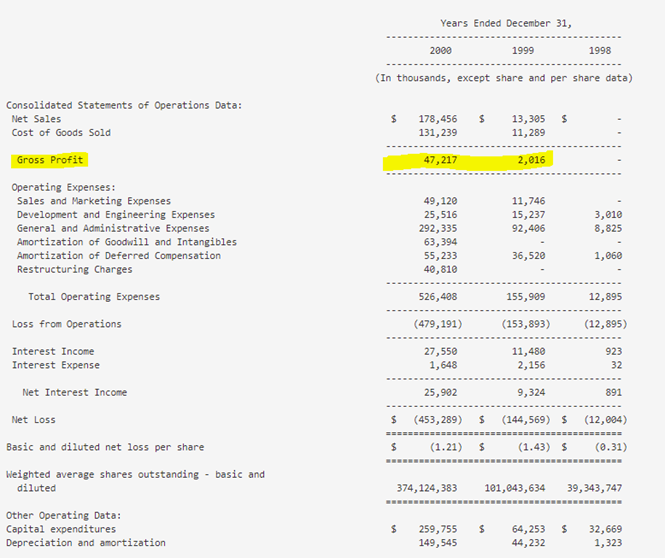 Let’s take survivorship bias to the extreme and calculate “justified gross profit multiple” for a group of companies in 2010.

This answers how much we could have paid to have these match SP500 total return.

@FocusedCompound had a fitting anecdote for this topic:

"Everything below gross profit in income statement tells a lot about the management, but the everything above about the business."
29/🧵

I know this approach cuts a lot of corners and everyone won't agree with it. But I like my investing simple with easy-to-follow reasoning I can believe myself and easily explain to others.

When I seek investment opportunities, it’s either back of the napkin, or nothing.
31/🧵

Hopefully you’ve found this approach useful to your thinking.

If you liked this thread and the way things are presented, make sure to hit a FOLLOW for @hkeskiva
32/🧵

This was one way to think about and value pre-profit companies!

For similar business threads and tweets, give a follow for

If you are still with me, huge thanks and wishing you a great weekend! 🙂
33/🧵

For more similar threads on business and investing, you may be interested in this "meta-thread" of threads

There are multiple ways to embed @hkeskiva's unrolled thread: