Thread by @yungneocon: "I almost want to write a (more polemical than scholarly) addition to James Scott’s ‘Seeing like a State’ that focuses on how we all come t [...]"

The Cosmist Insurrection, Inc. ™ @yungneocon
Read on Twitter Save as PDF
I almost want to write a (more polemical than scholarly) addition to James Scott’s ‘Seeing like a State’ that focuses on how we all come to see like a state, even if we’re anti state (or in some cases even stateless).
It would be along the lines of authors like Benjamin, Foucault, Berger, Anderson, Healy, Collins (both Randall and Harry), Restivo, Descola, Latour, and others.
Central thesis: we are inculcated culturally,socially,linguistically, habitually, emotionally, affectively, unconsciously, analytically, evidentially, technologically, & pragmatically to see, think, act & identify like a state, despite this being, in the last instance, impossible
At the same time, borrowing an insight from James, Dewey, Pierce, Heiddeger, Sartre, Wittgenstein, Arendt, Dreyfus and others, we tend to not notice machines and systems until they are broken. As such, we also learn to ‘see like a state doesn’t exist’
This may seem paradoxical but the idea is that if you take the state for granted as necessary or inevitable or at least universal and too costly to remove, then you are going to be myopic in your analyses where the state is concerned.
Ultimately it’s no more paradoxical than the idea that objectivity exists as a view from nowhere or everywhere (both of which are impossible in theory and in practice) , and maps to many of the same mechanisms of abstraction.
Instead the argument is that formally & substantively, as individuals, interactions, networks & institutions, we are conditioned, catalyzed, constrained, and in some domains directly caused and or constituted by statehood as a frame, assumption, episteme, referent and allegiance
The argument about science being a form of statecraft and objectivity and analytic mines being tied to it and to capital is old hat now, and isn’t really my concern here (tho that literature influences this).
While, similarly, we are induced to myopia about the state and its role precisely because of this effect.
The contrast to this are those that center and analyze the state as it plays a definitive and concrete role in all aspects of social life, but which problematize its unity, efficacy, potency, power, secrecy, and domain .
We can see this phenomena in people whose analyses of the state reduce it to social fiction or epiphenomenal super structure yet also believe in conspiracy theories or in the potent efficacy of the state to implement whatever policies it wants
Thus we come to analyze the world in the terms and methods of a policy maker or a single minded bureaucrat or central planner, at the same time that we erase the apparatus that would enable us to do that in the first place.
So there are those that deny the state has autonomous interests or efficacy, reducing it to either individuals or class struggle, but who think a ruthless cabal runs the state from behind and can use the CIA to topple any government with a snap of their fingers.
Or people that see the state as a mere field of action or a potentially benign or even helpful political sphere, that think the state could snap its fingers and institute mass healthcare or military reform if only the right people, ideas & social movements were arranged correctly
We can contrast this view with scholarship in the social sciences, humanities, theory, history, and policy that sees the state as involved in all affairs & trying to control everything,
But which is factionalized, structurally stupid, & constitutively unable to do so
We can contrast people who argue the US is the central hegemonic lynchpin of global imperialism (true) but then argue it could voluntarily and happily take actions it believed and/or knew (and which in fact are) contradictory or destabilizing toward that structural role
At the other end we have those who see the US as part of a system of states that includes the whole world system, its centrality documented but diminished relatively, but also understand that as a system of states, the US is fundamentally constrained.
These are general, ideal types, rarely totally met in practice—some would say straw men if they didn’t understand what a heuristic is—but i chose each of these examples because I’ve encountered people in person, online, in the public sphere & in scholarship who believe these
Which is to say, these may be ideal typical heuristics that abstract from the messiness of reality, but i chose them because they each have real representatives who believe the ideas above as stated.
In each case of the above dichotomies, the first position is the one that sees like a state, but at the same time, sees without the state (as tho it doesn’t exist), The second position sees the state, in partial form, and acknowledges this partiality & either tries to not
see like a state, or admits they must see like a state, given the realities of the world, but attends to that fact with reflexivity, systems thinking, comparative method & deep history. 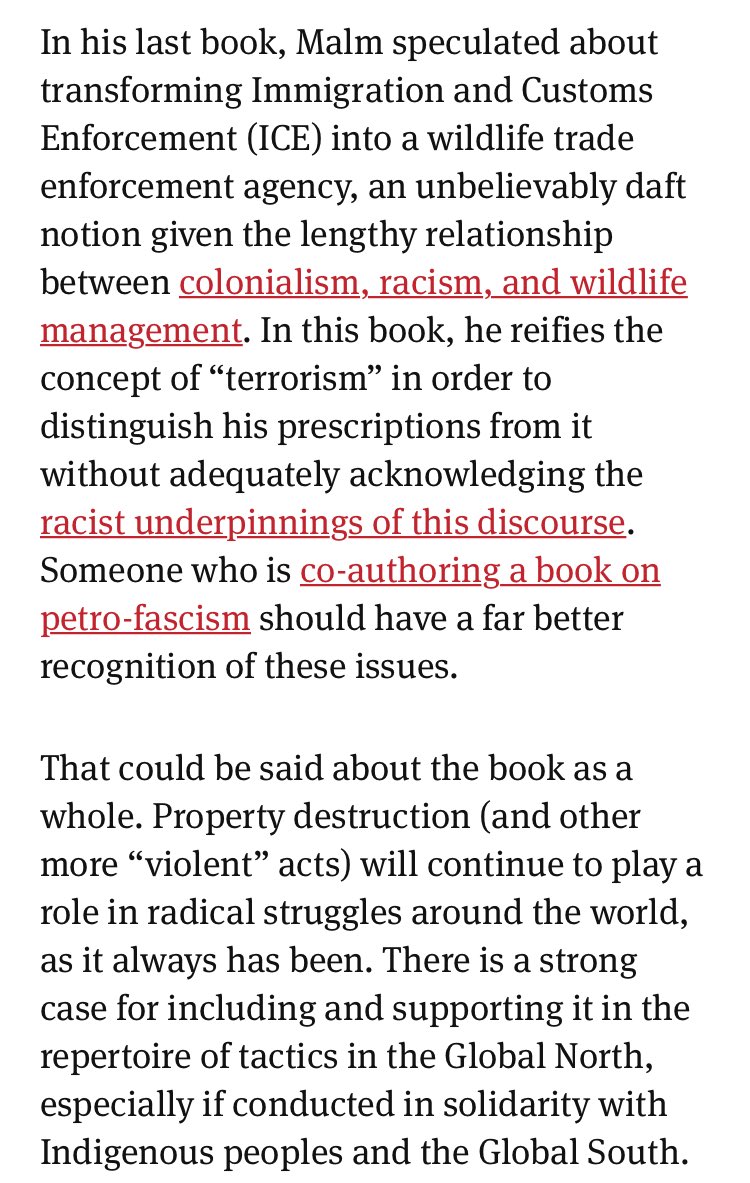 Andreas Malm’s ‘How to Blow Up a Pipeline’ is very annoying. It’s starts strong and the first chapters are good but then it gets to the chapter ‘Breaking the Spell’ which is packed with utter horseshit
From citing papers on luxury consumption as cause of climate emissions or fake accounting used to create BS climate Gini coefficients to misrepresentation of certain left wing movements, to thorough misunderstandings of geopolitics, it is really bad
The critique of pacifism and of the usual arguments used to defend it is great but the rest of the chapter is garbagio.
+ 4 more tweets 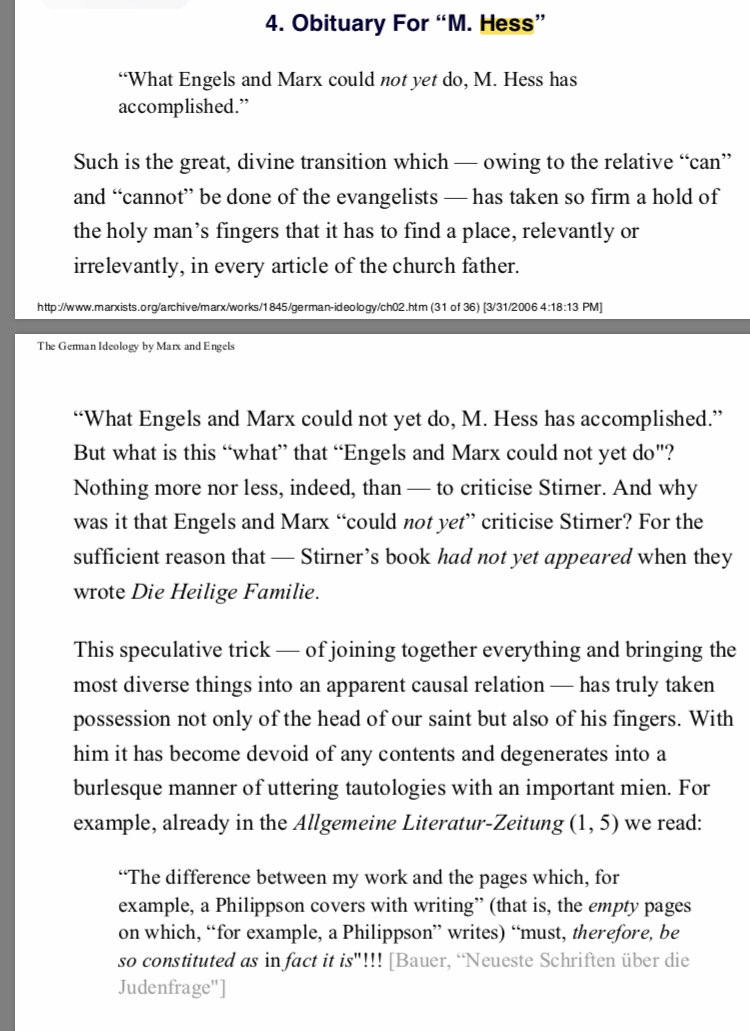 Cancelling Karl Marx for ‘On the Jewish Question’, but not for any antisemitism, or historically dated notions of religion, but by using Moses Hess’ definition of Judaism & emancipation, That makes Marx a crypto-Zionist
I’m (hopefully) obviously joking, but the connection really is there, as Hess was his early & longtime friend & interlocutor, & the basis for much of ‘On the Jewish Question’, Marx’s deployment of Feuerbach & materialist theory in reply to fellow Yung Hegelian Bruno Baeur.
Hess, although he introduced Engels to the communist circles of his time & was friends with both Marx & Engels, in a relation of mutual influence, they had fallen out by the end of the 40s over Hess’ humanism, Spinozism & utopian socialism.
+ 110 more tweets 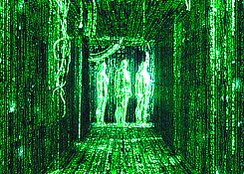 I'll post one tip about writing for every like this tweet gets (will cap at 100)
2. Prolific writers are born, but great writers are made Some people possess the instinct to write A LOT, they dont need to be made or trained to do this -In contrast, writing as a SKILL is highly trainable Quantity and quality are not the same
1. Write every day is generic advice and only directionally true The struggle for many is WHAT to write about, as much it is the resistance to writing
+ 54 more tweets

(thread) ya so videogames are about to do a swandive into a empty pool soon thanks to "helpful" soymanned (and wom*n'd) gaming companies with a "fun and diverse atmosphere and PIZZAS ON FRIDAYS XD" Zoomers wont really know what gaming was like before this. so lets break it down
The overmoderation of videogame communities has always been a issue as long as the internet has existed. (see neogaf). However thats not enough because all culture must be consumed and destroyed and raped by the corporate bugperson coastal elite.
We have to understand the people making videogames today are people who , by and large , are not creative or smart or talented. But simply office workers. They are human cattle and you can interchange them for each other and it will have no effect on quality.
+ 90 more tweets

Smriti Z Irani
@smritiirani •
*IMPORTANT Thread* If you come to know of any child who has lost both parents to COVID and has no one to take care of her/him, inform Police or Child Welfare Committee of your district or contact Childline 1098. It is your legal responsibility.
It is illegal to give or take orphan children of any one else in adoption. Such children should be taken to Child welfare committee, which will take necessary action in the best interest of the child.
If anyone contacts you regarding orphan children available for direct adoption, do not get into the trap & stop them. It’s illegal. Inform local Child welfare Committee or Police or Childline 1098 about such children.
+ 4 more tweets 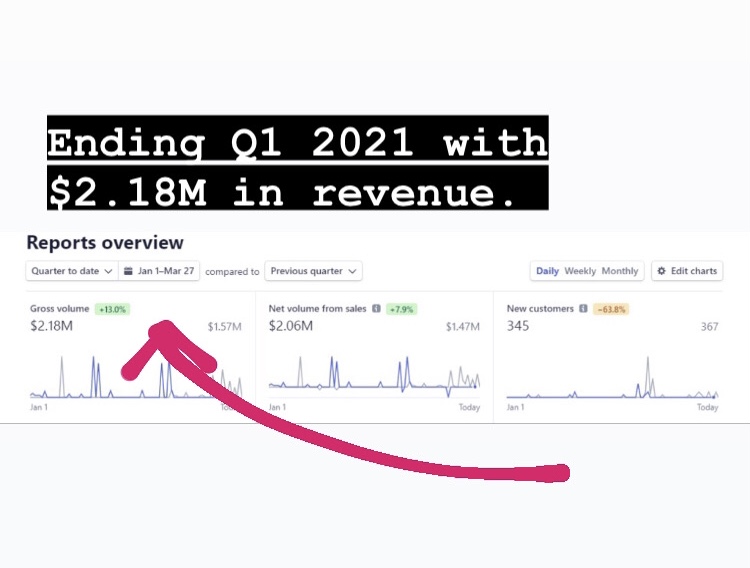 Ended Q1 2021 with $2.18M Here’s some of my guiding principles that help me stay aligned Personal | Finance | Business Lengthy Thread ↓
quick background I graduated with a 2/2 from the University of Ibadan & by society’s construct I’d prolly be getting paid peanuts at a secondary school or so back in Nigeria but I wasn’t cut out for that, I took the online space serious since I was 15 (best decision ever)
Definitely not the easiest thing matter of fact, I’ve been like the rebel in the family lol parents are academics & all that but I had a taste of money online awaiting admission & never looked back Here’s some things I’ve learned over time 👇?
+ 26 more tweets

There are multiple ways to embed @yungneocon's unrolled thread: