Thread by @UnmodernM: "Game theory and Zero-Sum games. Strategies that shift power in your favour. A thread."

| UM @UnmodernM
Read on Twitter Save as PDF
Game theory and Zero-Sum games.

Strategies that shift power in your favour.

A thread.
Consider a market where there are only 2 companies.

It will depend how Co. Y will respond.

If Y matches prices, then it hurts X to cut prices, as market share will remain the same.

X must anticipate what Y will do.
Consider a workplace with two employees seeking a promotion from the employer that occupies the same position.

Does employee X have enough bargaining power to act first and get promoted?

If not, how much time does X have before Y acts?

Kid X wants to take cookies from the jar, but waits until Kid Y does something that irritates the parents before acting,

thereby reducing the severity of his punishment.
Here's how game theory works:

There's 3 elements in a game:

the actions of the players,

and their respective payoffs of each action.

It's a simultaneous game of incomplete information; the players actions cannot be observed until you act.
Game theory is everywhere. From your family, work, businesses, political parties seeking re-election,

it impacts all your decision making, all the time.

The aim of implementing game theory is the same across all domains;

You have 2 criminals under interrogation; Tony & Sal.

3. If both confess, both get 5yrs.
Here are the possible actions and the respective payoffs of each criminal: 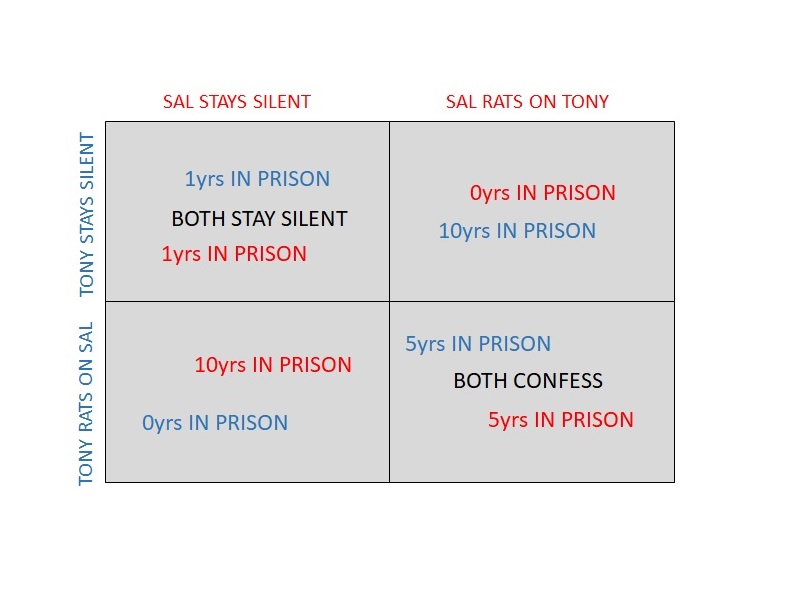 The dominant choice is to rat.

The cost of not ratting is either 1 year or 10 years.

The cost of ratting is either 0 or 5.

Either way, the winning action is to rat out the partner in crime.

The rewards are set up so that the criminals rat on each other.
Notice how game theory suggests the "most dominant/effective strategy".

Not the most emotional, or loyal, or moral, or ethical strategy.

Irrespective what Sal does, Tony NEEDS to rat on Sal to reach the best possible scenario. And vice versa for Sal.
When both players have found their most dominant strategy, irrespective of what the other does,

This equilibrium is reached when each player have chosen the best decision for themselves in consideration to other players anticipated actions.
Consider two competitors in the grocery food market.

Should Walmart lower the price in a product to capture market share? 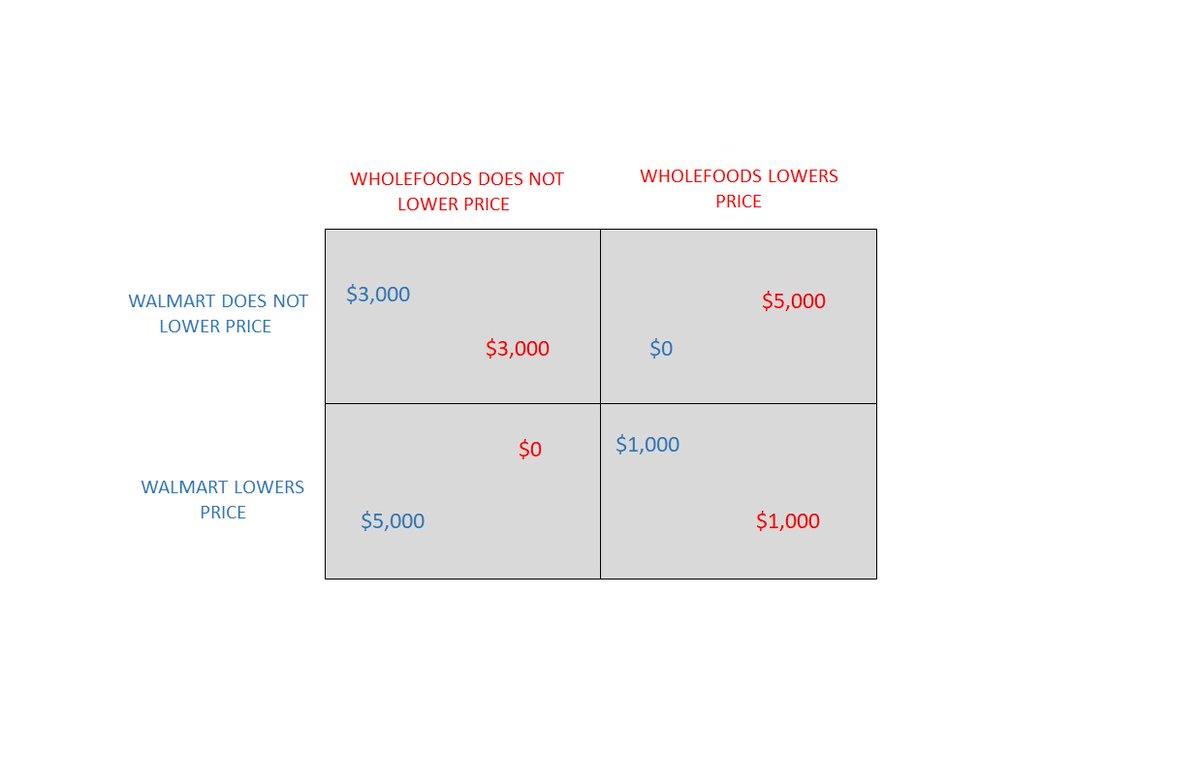 The payoffs for Walmart to NOT lower the prices are:

The payoffs for Walmart to lower prices are:

The dominant strategy is to lower the price irrespective of what Wholefoods does.
One shot games are very different to repeated games.

You are less likely to engage in reciprocity and value exchange when you have ONE shot to take it all.

But when you have to repeatedly deal with a competitor, you are more likely to find a common ground of reciprocity.
When both players (Walmart and Wholefoods) reach the conclusion that the best decision is to lower the price,

Nash Equilibrium is once again reached.

over co-operation.
For long term attainment of self-interest, game theory will suggest co-operation through value exchange and transparency.

An example of repeated games is the OPEC cartel.

Several oil producing nations make up the cartel. They all come to the table to negotiate set sale prices.
If all nations abide by the negotiations and sell every oil barrel at the set price, this would achieve harmony within the cartel.

Does this happen? No.

Each nation is tempted to steal market share by overproducing and selling it cheaper.
This destabilises the cartel, until the nation with the biggest muscle (Saudi Arabia) threatens to dump its oil reserves at dirt cheap prices,

forcing all the other cheating nations to come back to the negotiation table.

And this validates the hypothesis that the best course of action in repeated games, is to co-operate.
If the two mobs of Tony and Sal find themselves constantly losing man power to the FBI,

the interrogation becomes a repeated game.

And therefore, it becomes worthwhile for both mobs to set co-operative ground rules and perhaps NOT rat each other out in the future.
Nash Equilibrium is the best decision in ONE shot games.

But not in repeated games.

Game theory also suggests that if you're going to negotiate with someone for the last time ever,

its likely that you will be cheated on, and therefore you should aim for Nash Equilibrium.
Not all games are competitive. Consider a co-ordination game. If Walmart and Wholefoods pick the same supplier to get apples, their cost of purchase drops significantly,

due to less implicit costs associated with the supplier when providing large volumes of apples. 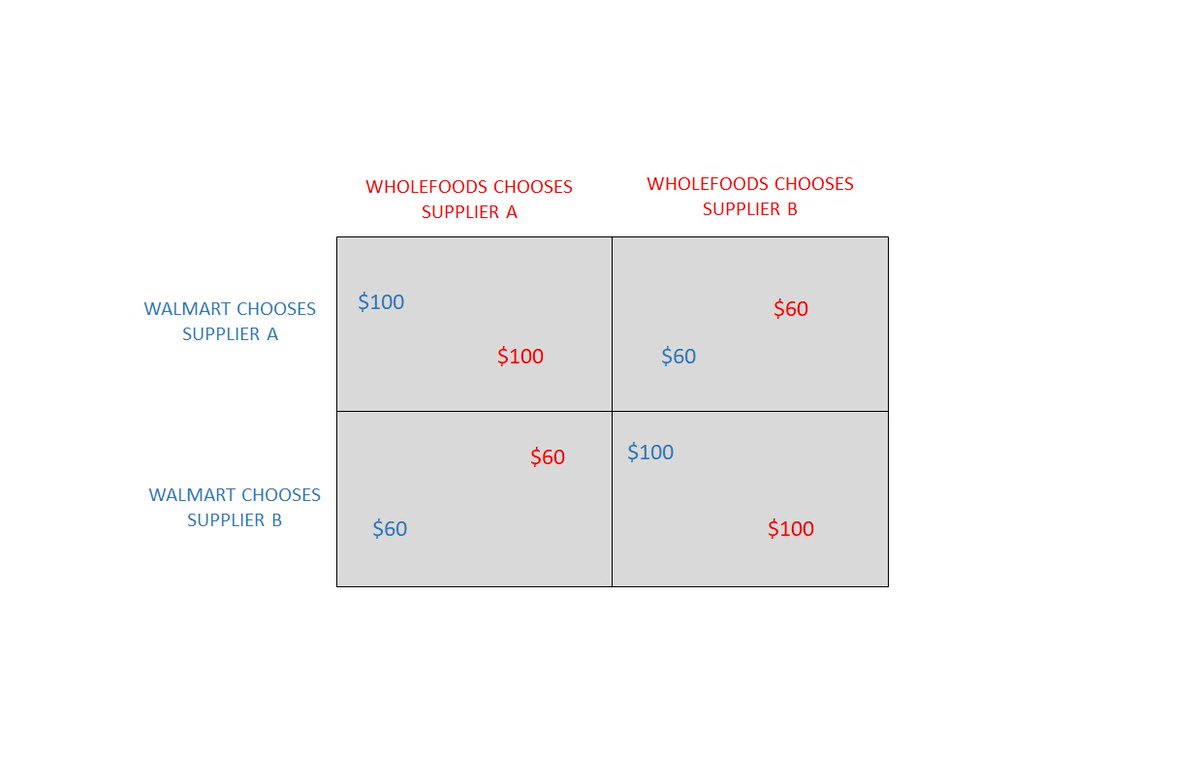 In such cases, Walmart should communicate with Wholefoods so they can choose the same supplier and reap the cost advantage benefits of price-to-volume purchases.

Note: you can replace Walmart with any other variable. The context changes, but the essence remains the same.
Here's another example. Let's say the criminals are out of jail, & take up hunting as a hobby.

If they collectively hunt a lion, they'll be able to sell the skin for $200.

If they try to hunt a lion alone, their chances are zero. 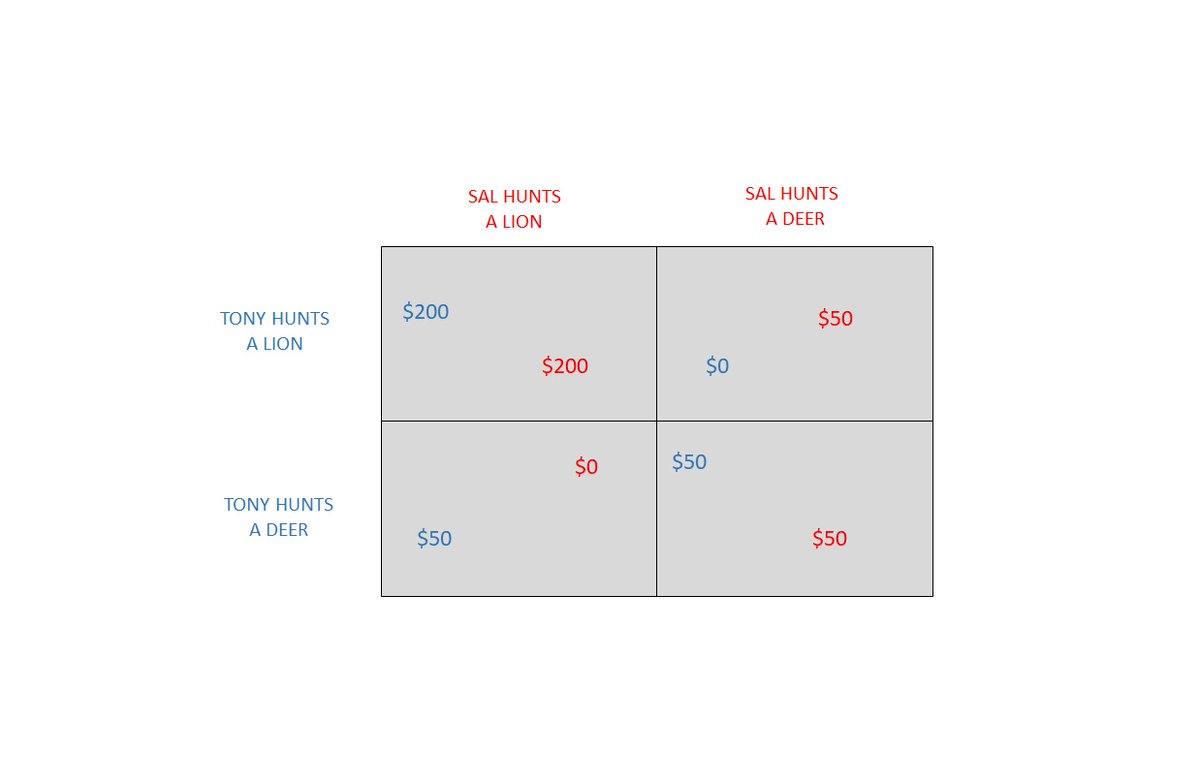 The best course of action is for both players to coordinate and quadruple their profits by hunting a lion.

Individually, they may be able to hunt a deer, but the payoff is dismal when compared to joining forces to hunt a lion.
Here’s an example of competitive games.

It’s in both country’s best interest to develop nuclear weapons irrespective of what the other country does. 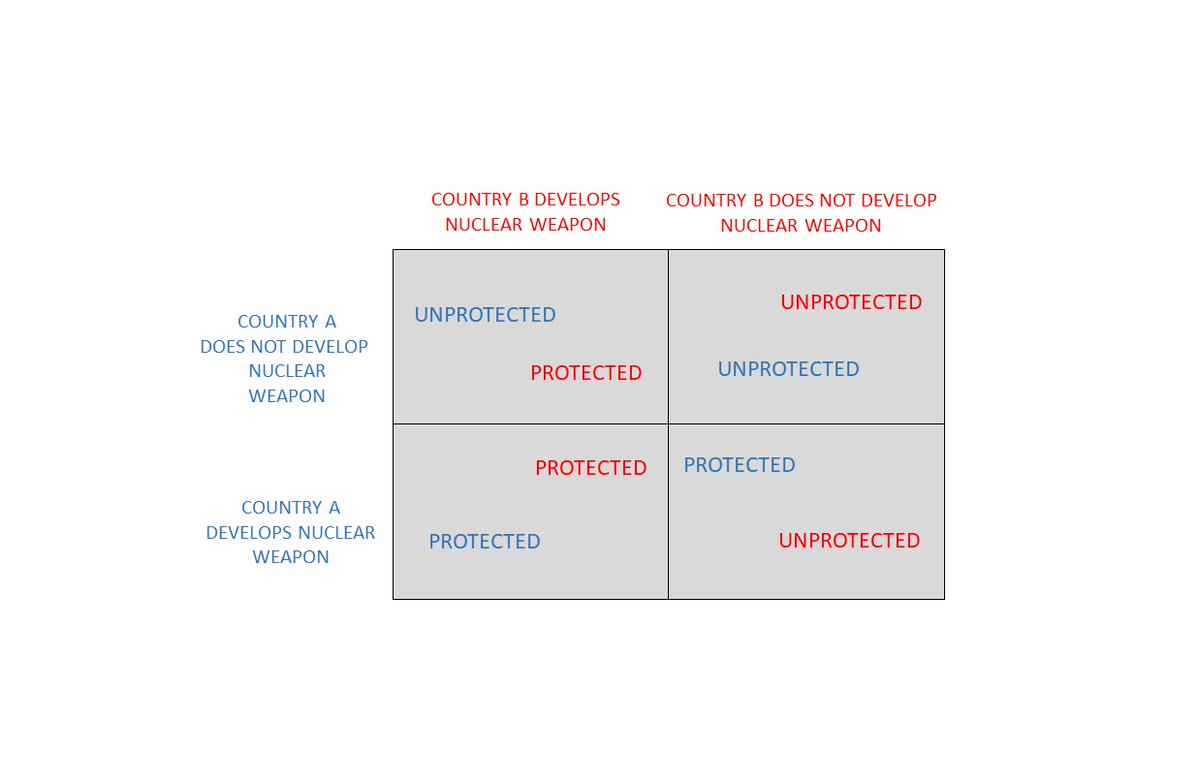 Game theory assumes that the same rules are played by both players.

In some cases, the game is rigged. One player may have less to lose.

In such cases, the Nash Equilibrium is almost always a tactical error.

Co-operation should be the aim.
The player who has the most to lose will have the biggest challenges in making decisions in response to a competitor.

Negotiations should be avoided at all costs.

If unavoidable, co-operation should be the default, and betrayal should also be anticipated.
The key thing to remember is that you are either playing a ONE shot game, or a repeated game.

In one shot game, the probability of Nash Equilibrium being the dominant strategy is highly likely. And that if you choose to not exercise it, your competitor will.
In repetitive games, the probability of co-operation will almost always lead to the better outcome.

The attainment of self-interest on a long time frame is achieved through reciprocity, irrespective of competitor intentions.

Assuming you both something to lose of equal value.
have*

There are multiple ways to embed @UnmodernM's unrolled thread: