Thread by @thicc_garfield: "Lets see if I have enough followers to do this. 1 like = 1 hot take."

garfield D. bussy enjoyer (anti pet turtle arc) @thicc_garfield
Read on Twitter Save as PDF
Lets see if I have enough followers to do this. 1 like = 1 hot take.
1. I think people massively overuse the word tankie to the point where the word is kind of becoming less and less meaningful
2. I don’t think all people are worth rehabilitation because some are simply too far gone for our reach
3. Abolishing homework is unironically a good idea
4. We’re more likely to see fascism come about in our era than we are to see a social democracy in America.
5. I’d consider America to be one of the most successful terrorist organizations on the planet today
6. I think the CCP has actually done a lot of good when it comes to poverty alleviation
7. Justified hierarchies exist under anarchism (subtweet you know who you are lol)
8. Wikipedia is a good source to learn about stuff and anyone who discredits it only is doing it because wikipedia have info on there that they don’t like
9. Socialism without democratic measures isn’t socialism
10. You don’t have to read theory to be a leftist and saying that it’s required you do read theory is classist and ableist
11. I find brutalist architecture to be very aesthetically pleasing
11.5. Improving on this take by saying eco brutalism is best

12. Most people treat politics too much like a friend circle and I think that’s why leftists hate eachother so much
13. Tankies are a greater threat to spreading socialism through the internet than fascists are
14. The left doesn’t do enough organizing. People like Hasan, Vaush, destiny ect should really do more irl political action like destiny did already with the canvassing in Georgia. With the money they have and influence they have we can easily start turning out more progressives
15. Online content creators are better sources to learn about leftism and just left ideas in general than it is to read theory or research in depth certain concepts and events
16. I’d accept some austerity living so that we can slow down climate change (yes this means eating bugs and living in pod)
17. Real fascism will rise soon due to the climate crisis and I don’t think leftists are actually gonna be able to stop it
18. The left is a lot of the time really weirdly sexist/ misogynistic towards women for having a semi bad take or does something that looks hypocritical but isn’t
19. I find neo pronouns to be weird and kind of negate the purpose of pronouns but if you wanna go by tree/treeself I’m sure as fuck not gonna stop you Live your life :)
20. Gay people have a insanely bad hook up culture that I’d say rivals straight hook up culture. It’s often times very embarrassing to think about since we’re stereotyped as sluts already.

Twitter Engineering
@TwitterEng •
You may have heard about this year's Economics Nobel Prize winners - David Card, Josh Angrist (@metrics52) & Guido Imbens. Their publicly available work has helped us solve tough problems @Twitter, and we're excited to celebrate by sharing how their findings have inspired us.
Understanding causal relationships is core to our work on identifying growth opportunities and measuring impact. This year's winners laid the foundation for cutting-edge techniques we use to understand where Twitter can improve and how changes affect our platform experience.
While online experimentation is helpful to understand the impact of a product change, it may not be the most efficient way to measure long-term impact.
+ 13 more tweets

tef
@tef_ebooks •
every so often i think about 'agile' has no concrete definition, well no real explanation from the agile manifesto signatories outside of "you're doing it wrong" i hear there's another definition of agile but i'd have to pay for a workshop
some of my friends have a soft spot for agile development in any form as they've worked long enough in this industry to have suffered under the "rational development process" which might as well be termed waterfall's revenge, now replete with uml and flowcharts
like with most things in life that get fashionable, after someone comes up with an idea, gives it a name, other people will use the name to refer to whatever they're doing, to assert that they're also doing the fashionable thing agile, restful, observability, the list ever grows
+ 14 more tweets 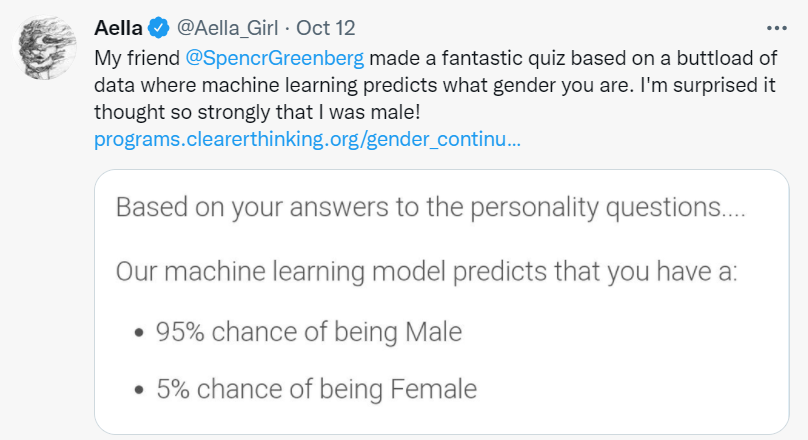 This is purely because the model doesn't have a bucket for "demon"
This is the idle musing of a demon:
"How do I set it up so someone commits a thousand horrible soul-destroying sins all at once *and* convince them to accept evil to rationalize it?" - the thought process of a demon.
+ 4 more tweets

There are multiple ways to embed @thicc_garfield's unrolled thread: