Thread by @michaelharriot: "Thread: Nikki Haley said the Confederate Flag was a symbol of "service and sacrifice and heritage" I was born and raised in SC so I know [...]"

michaelharriot @michaelharriot
Read on Twitter Archive
Archive to PDF: This thread can be removed from Twitter at anytime. Archive this thread to PDF, save and print. It is a premium feature and costs $5 per month.
Thread: Nikki Haley said the Confederate Flag was a symbol of "service and sacrifice and heritage"

I was born and raised in SC so I know a little about this.

Here is the truth behind that statement:
"The Declaration of the Immediate Causes Which Induce and Justify the Secession of South Carolina from the Federal Union" made ZERO mentions of "heritage" or "sacrifice."

"Service" was only mentioned in the context of enslavement

"Slavery" was mentioned 18 times.
When SC listed the reasons for treason, they said:

"they have denounced as sinful the institution of slavery; they have permitted open establishment among them of societies, whose avowed object is to disturb the peace and to eloign the property of the citizens of other States"
On Dec. 20, 1860, South Carolina became the first state to commit treason by officially declaring that its citizens didn't want to be a part of the United States if it meant they couldn't treat black people as property.
"The election of a man to the high office of President of the United States, whose opinions and purposes are hostile to slavery."

and "slavery is in the course of ultimate extinction." 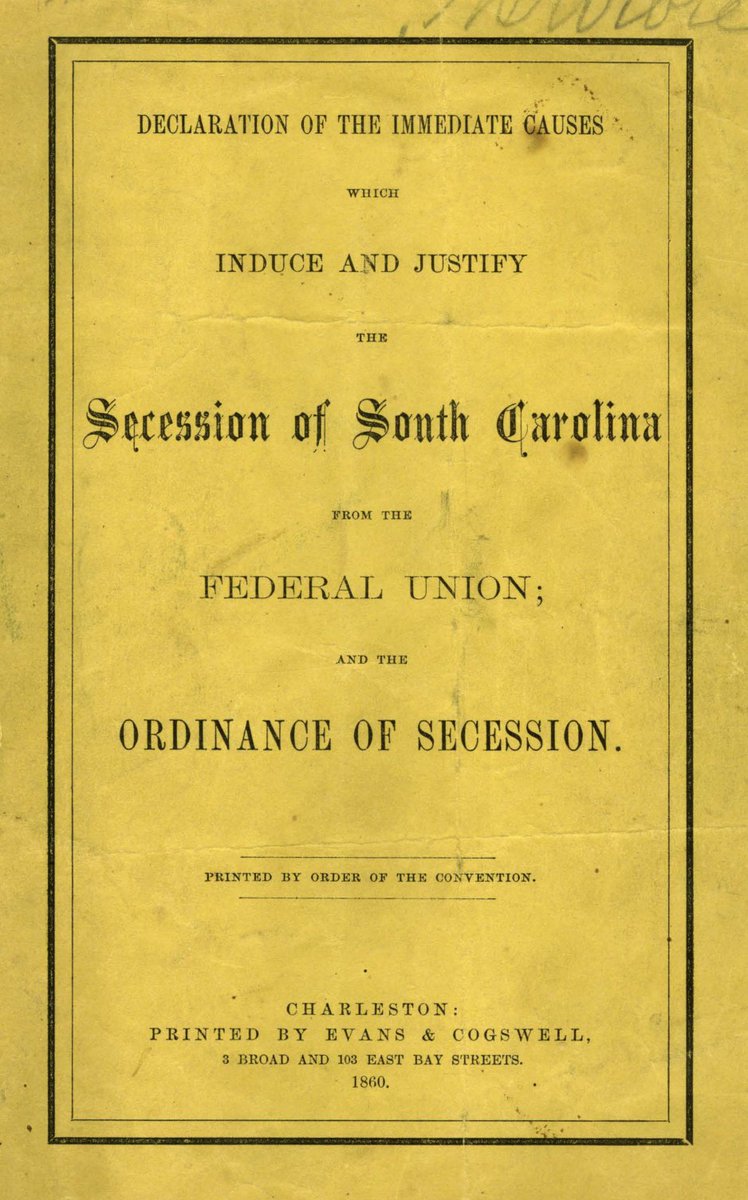 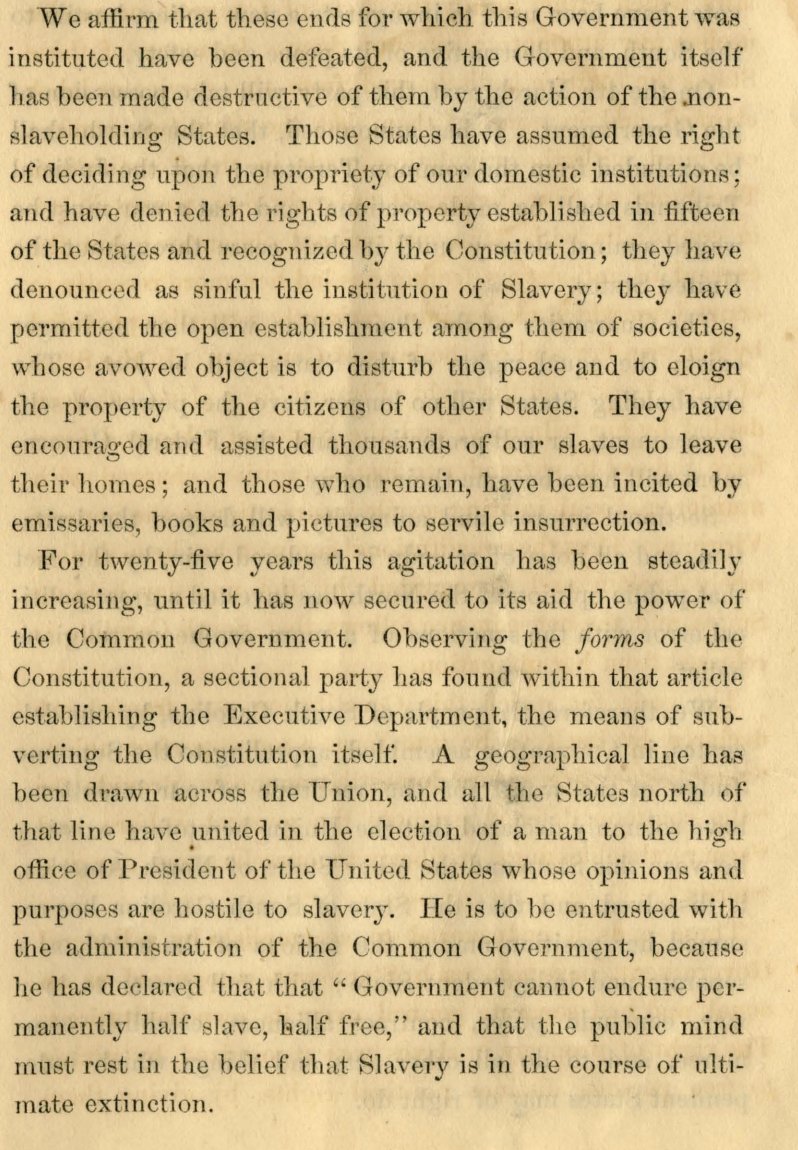 Make no mistake about it, slavery was the one and only reason for the War for White Supremacy (I can't call it "civil." There was nothing civil about the bloodiest war in American history.)

But, I will admit, that there was no Confederate flag at the time
Now the first Confederate Flag was the Stars and Bars.

But the white supremacist traitors to America HATED that flag because they hated America. They thought the Confederate flag had too much of a resembled the U.S. Flag. 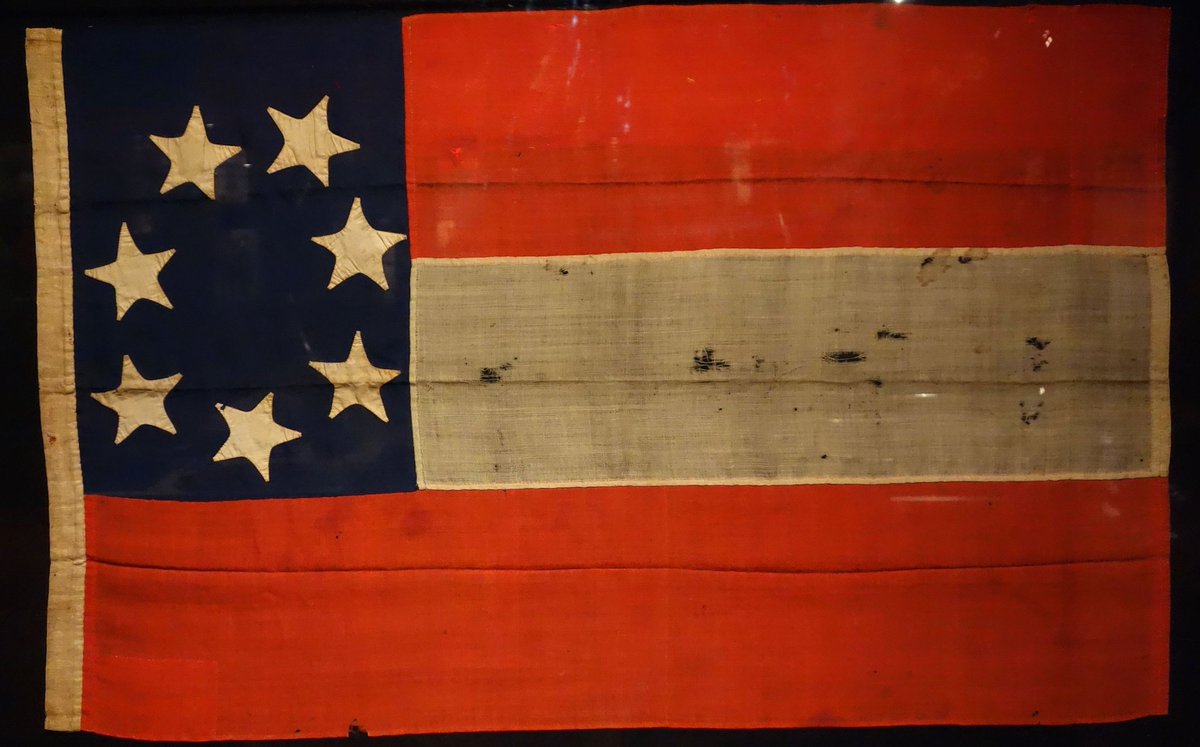 Plus, that flag was designed by an immigrant. They needed something more racist. More home-grown. More... white.

On April 20, 1863, a newspaper editor in Savannah said that the Confederacy should start using this design as its battle flag. 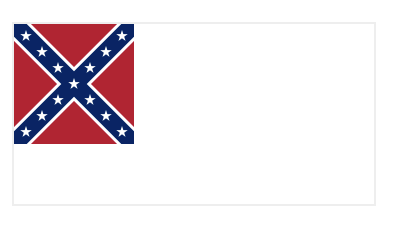 The flag that you commonly see, was NEVER EVER EVER the official flag for the Confederate States of America. It was only used as the battle flag.

And NEVER in SC. It was used in Virginia by Robert E. Lee.
But the story of how it became the symbol of the Confederacy and white supremacy is even more interesting.

And it started LONG before the Civil War.
In 1812, on the campus of the University of North Carolina with a group that called itself the "Circle of Brothers."

(By the way, I am well aware that this is gonna sound like some Illuminati shit but you have to stick around until the end. Also, every word is documented.)
They eventually added a red stripe to the flag because these dumb-ass racists were so stupid that they forgot that flags flap in the wind. People often thought these traitors were waving the white flag in battle. 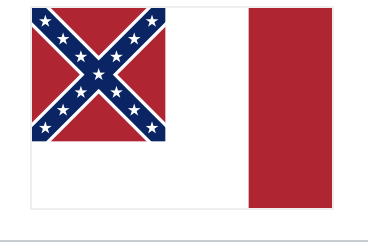 See, these men were BROTHERS, and some of them were in high places.

After the Civil War, one of its brothers, Tenn. Confederate Captain John C. Lester, decided to start another organization in Pulaski, Tenn. that would flourish.

They would call themselves the Ku Klux Klan.
The group became very powerful and its members met even after graduation. By 1855, there were Circle of Brothers chapters all over the South.

Then, in 1855, someone at the University of Alabama exposed all of the secrets and the group died out.... 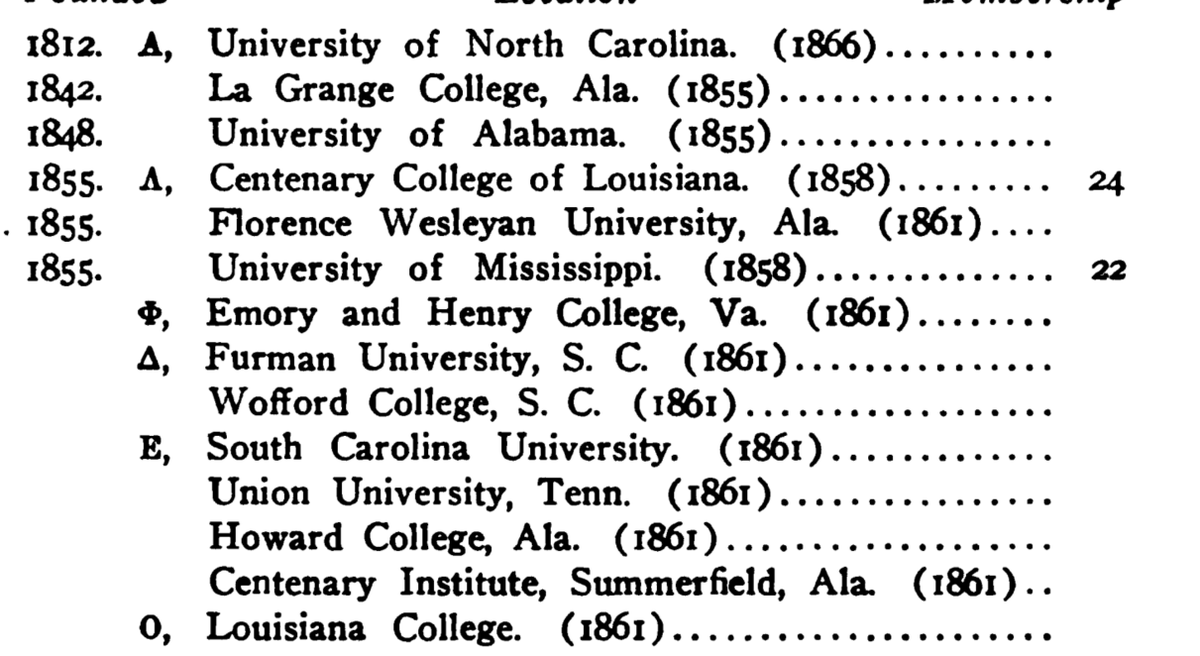 One of the things they were intent on is spreading the use of the Confederate flag. They literally rewrote history and made these dumb people believe that Lee's battle flag was THE Confederate Flag, even though it never was.
One of the things these people did was start the "lost cause" movement that honored Confederate veterans. In 1904, the United Confederate Veterans and the United Daughters of the Confederacy issued a report saying the Lee flag was the official Confederate flag.
The members of Kappa Alpha Order became some of the most prominent and powerful people in history. They had (and still have) Senators, mayors and governors.

They are dedicated to preserving the "Old South."
Textbooks adopted it as fact. Historians didn't argue, even though it wasn't true. But these "Lost cause" organizations did something else:

When he became president, a new fraternity organized on campus, called the Kappa Alpha Order. Of course, they adopted the Confederate Battle Flag of Lee, too.
"McEnery and Penn having been elected governor and lieutenant-governor by the white people, were duly installed by this overthrow of carpet-bag government, ousting the usurpers, Governor Kellogg (white) and Lieutenant-Governor Antoine (colored). United States troops took over...
...the state government and reinstated the usurpers but the national election of November 1876 recognized white supremacy in the South and gave us our state."

That was the original inscription.

It was funded by the "White League."
In the early 1900s when black people in the south began to vote, Confederate monuments started springing up to remind citizens of the lost cause of white supremacy.

Seriously, the Battle of Liberty Place monument, which started the current Confederate controversy reads:
The flag became ubiquitous on Southern campuses and now was associated with racist Southern Democrats who resisted integration.

When colleges tried to integrate, inspired by KA's "Old SOuth" flag, they would fly the Confederate flag.
ALL of these new statues would feature the Lee flag, even though no one used them in their State

But it gets deeper.

See, even after the KKK went underground, Kappa Alpha order was spreading. It's now on every major college campus.
Then, in 1948, in opposition to the Democratic Truman integrating the army and supporting civil rights legislation, Southern Democrats started the Souther States Rights Party or the Dixicrats.

They issued a statement saying:
"We oppose the elimination of segregation, the repeal of miscegenation statutes, the control of private employment by Federal bureaucrats called for by the misnamed civil rights program."

Their official logo was the Confederate flag.
"We stand for the segregation of the races and the racial integrity of each race; the constitutional right to choose one's associates; to accept private employment without governmental interference, and to earn one's living in any lawful way. "
The bullshit Lee flag would revive itself as the flag of white supremacy for the REAL civil war in America:

But wait, it gets deeper.
The flag was the symbol of people who opposed the end of Jim Crow, like Alabama Gov. George Wallace who was a staunch segregationist 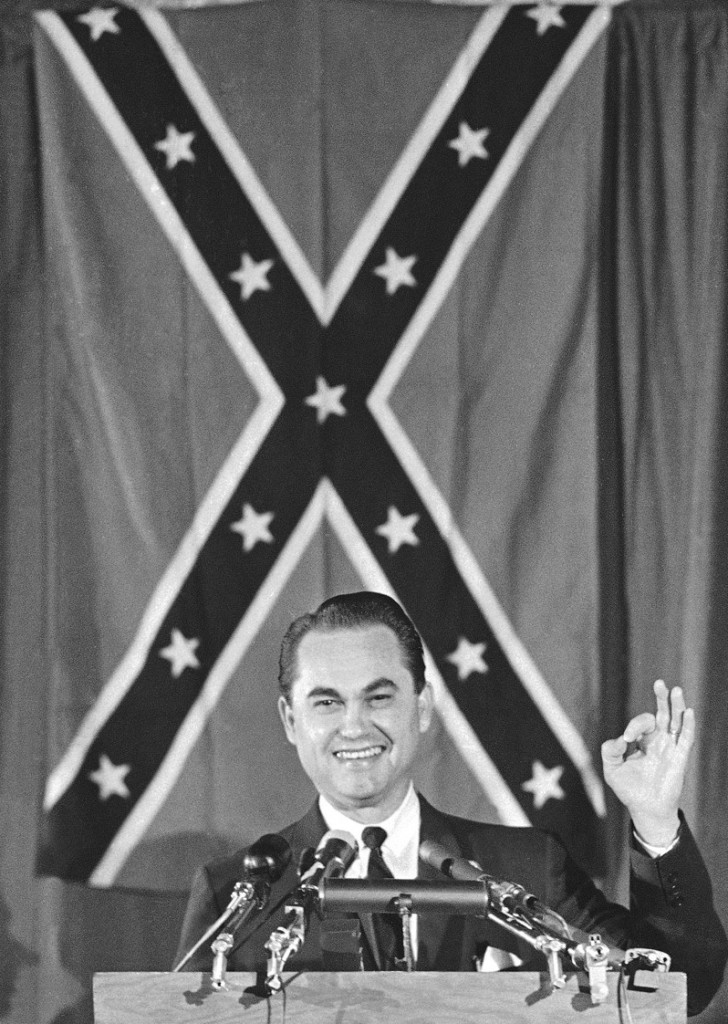 Here's the scene when Little Rock Ark. was integrated 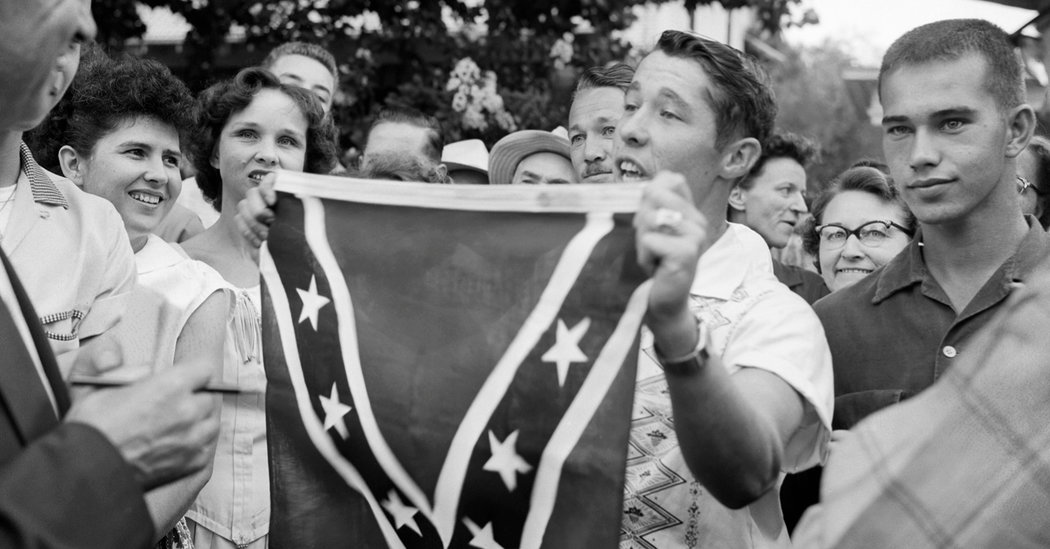 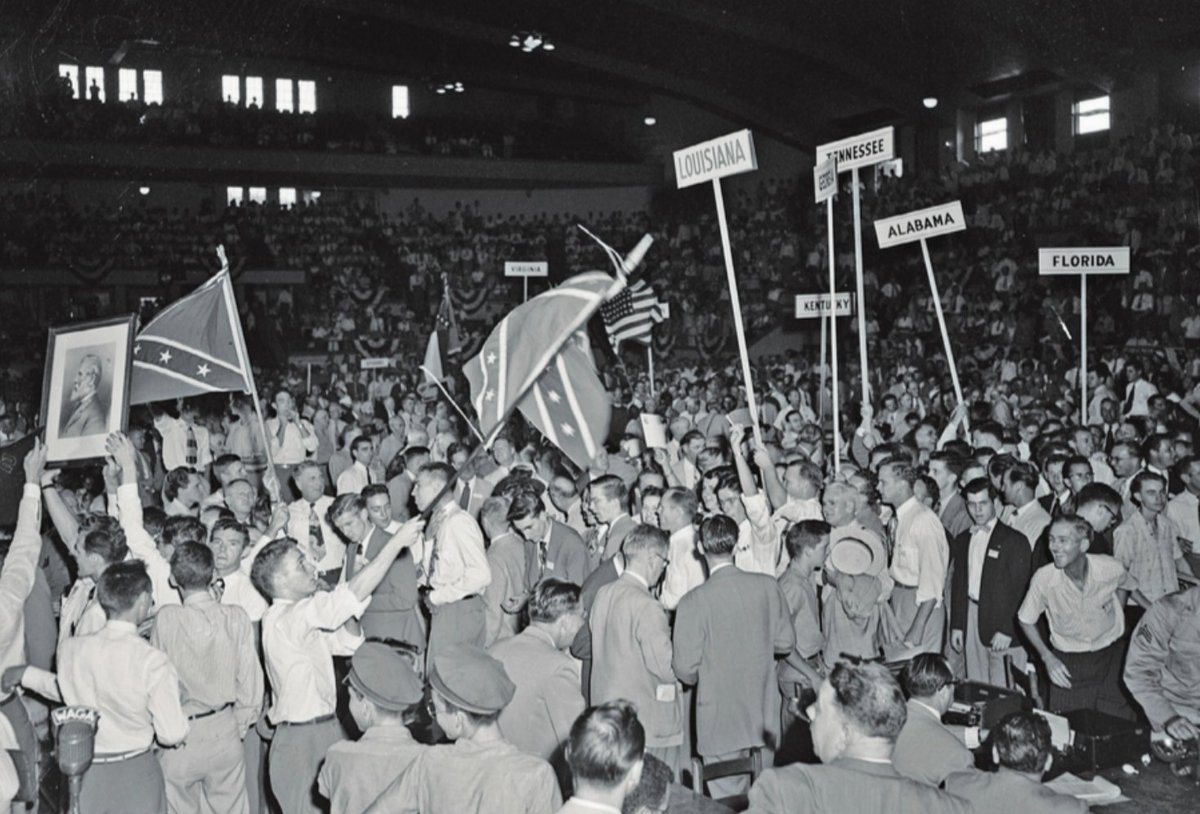 THIS is when racist Southern politicians exited the Democratic party and became Republicans. And they took the Confederate flag with them.

I'mma show you how I know:
In 1992, I was almost arrested trying to stop an "Old South" parade at my University. Every year, a fraternity would parade through the street. The only reason I wasn't arrested was because when I broke through the barricade and tried to stop it 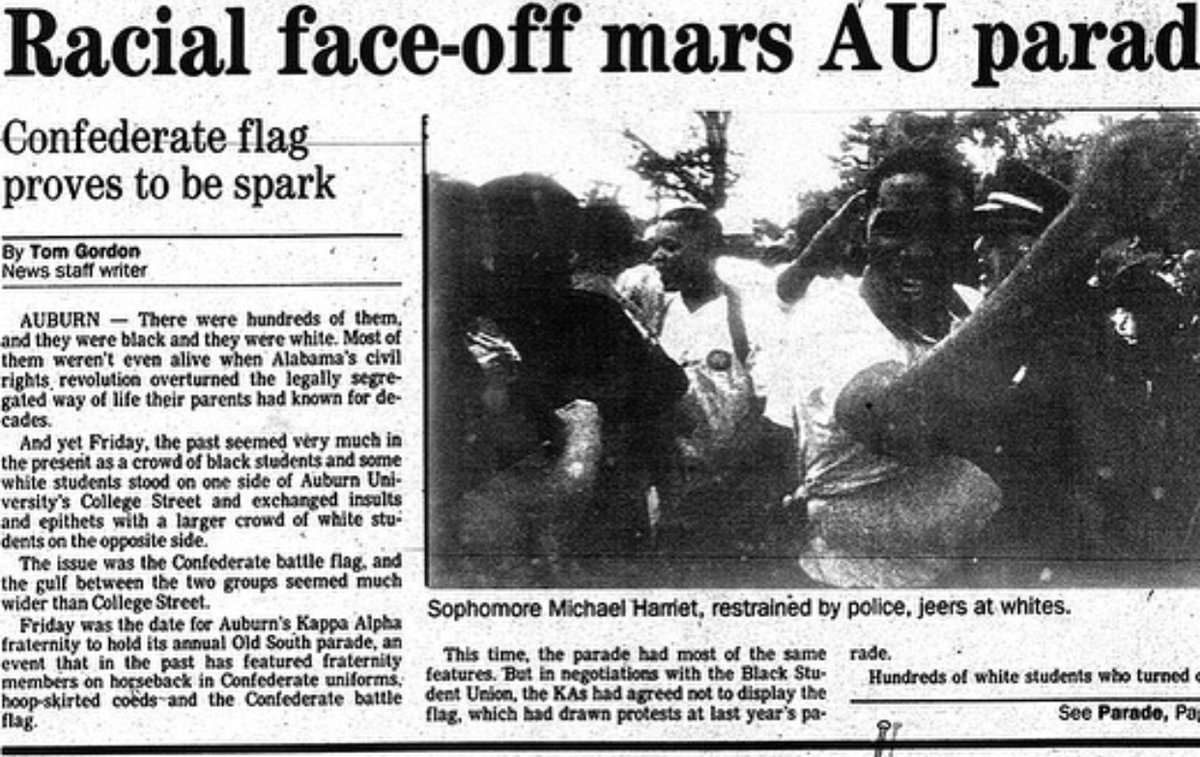 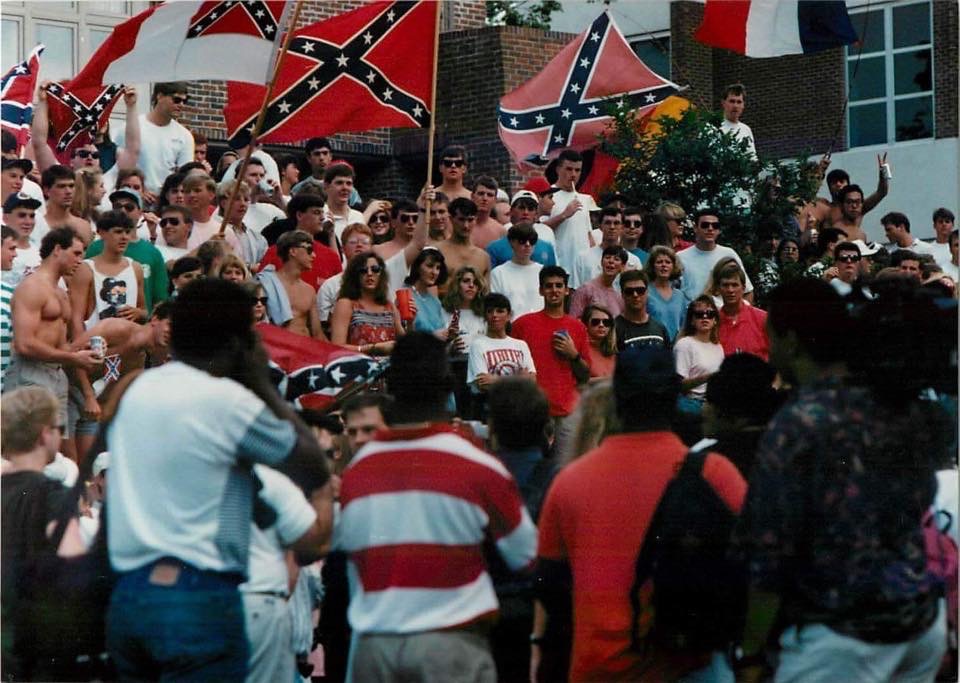 Tenn. Gov. Bill Lee is a member of Kappa Alpha, which is why, every year, he signs a proclamation declaring Klan leader Nathanial Bedford Forest
https://www.tennessean.com/story/news/politics/2019/07/12/tennessee-nathan-bedford-forrest-day-gov-bill-lee-signs-proclamation/1684059001/

He is a Republican.

SC wouldn't take down the Confederate Flag from its Statehouse until 2018
Other people surrounded me before the police did.

That fraternity was the Kappa Alpha Order.

This event, "Old South Week" happens at campuses across the country. 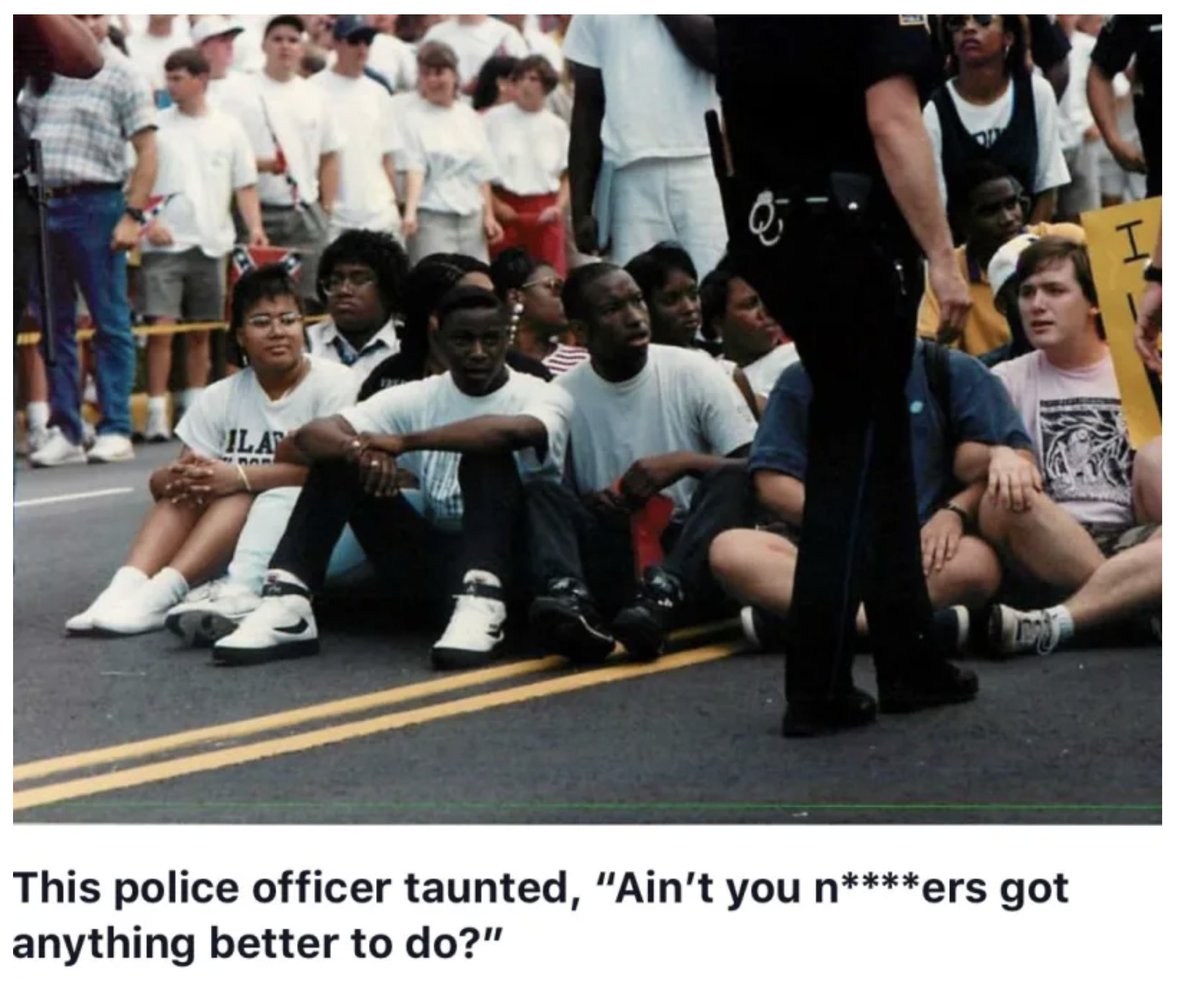 He is also a member of Kappa Alpha Order.
https://www.kappaalphaorder.org/2018/11/south-carolina-native-officially-elected-governor/
So why did I go through all that KA, Circle of Brothers BS?

Y'all know how I am. I'm long-winded.

See, this movement hasn't gone anywhere. I'm about to show y'all how this shit is all linked.
The Circle of Brothers group from UNC in 1812?

Well they didn't call themselves the "Circle of Brothers"

They used their Greek name, instead: "Kuklos Adelphon"

Or, as they Kappa Alpha chapters around the country call them:

See, after the original Kappa Alpha organization (or Kuklos Adelphon) disbanded in 1855, another group copied their ritual verbatim: 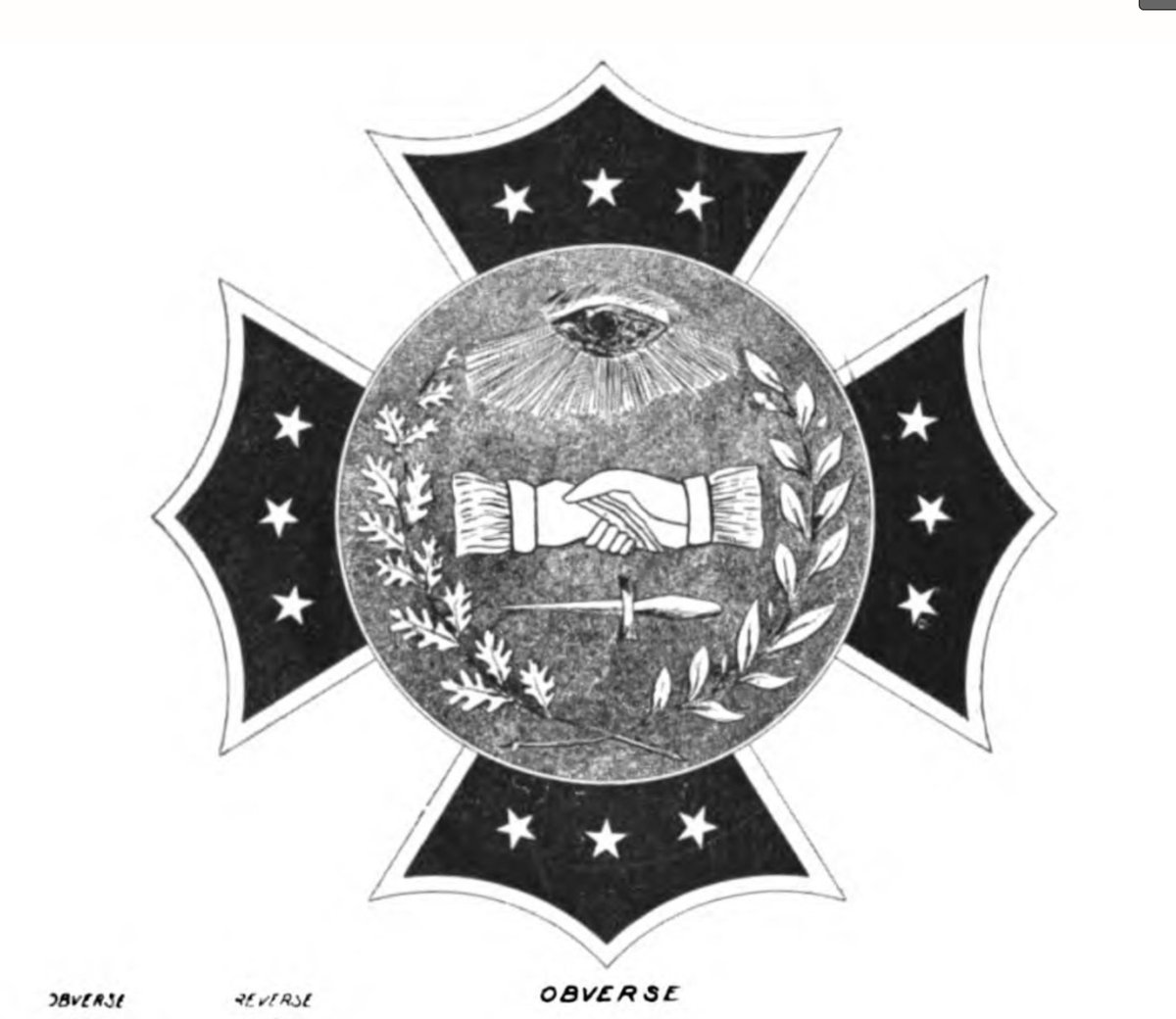 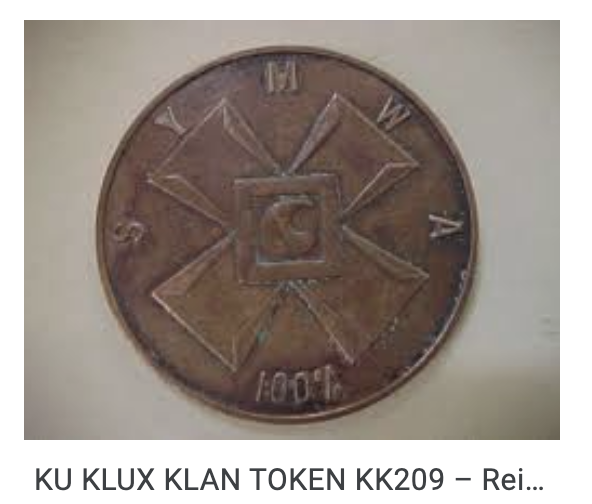 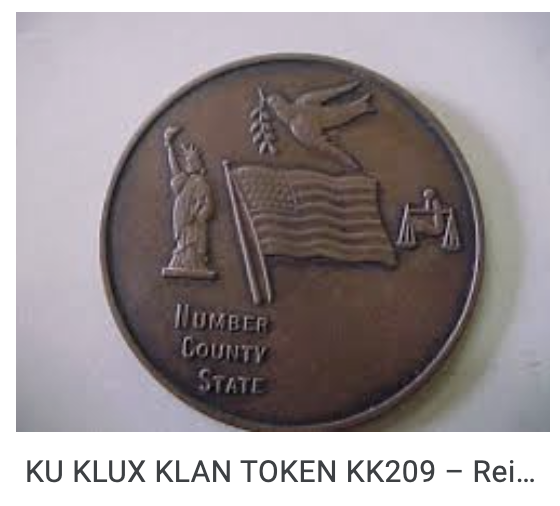 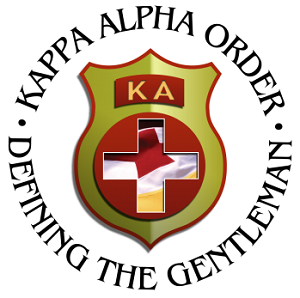 And remember that man who designed the REAL confederate flag that was mostly white? He said:

"As a people we are fighting to maintain the Heaven-ordained supremacy of the white man over the inferior or colored race; a white flag would thus be emblematical of our cause."
Nikki Haley knows what the cause was. The people who fly that flag know what the cause was. Even the original Confederates know the true meaning behind that flag. But they never called it the "Confederate Flag" because they had a more common nickname:

More from @michaelharriot View All